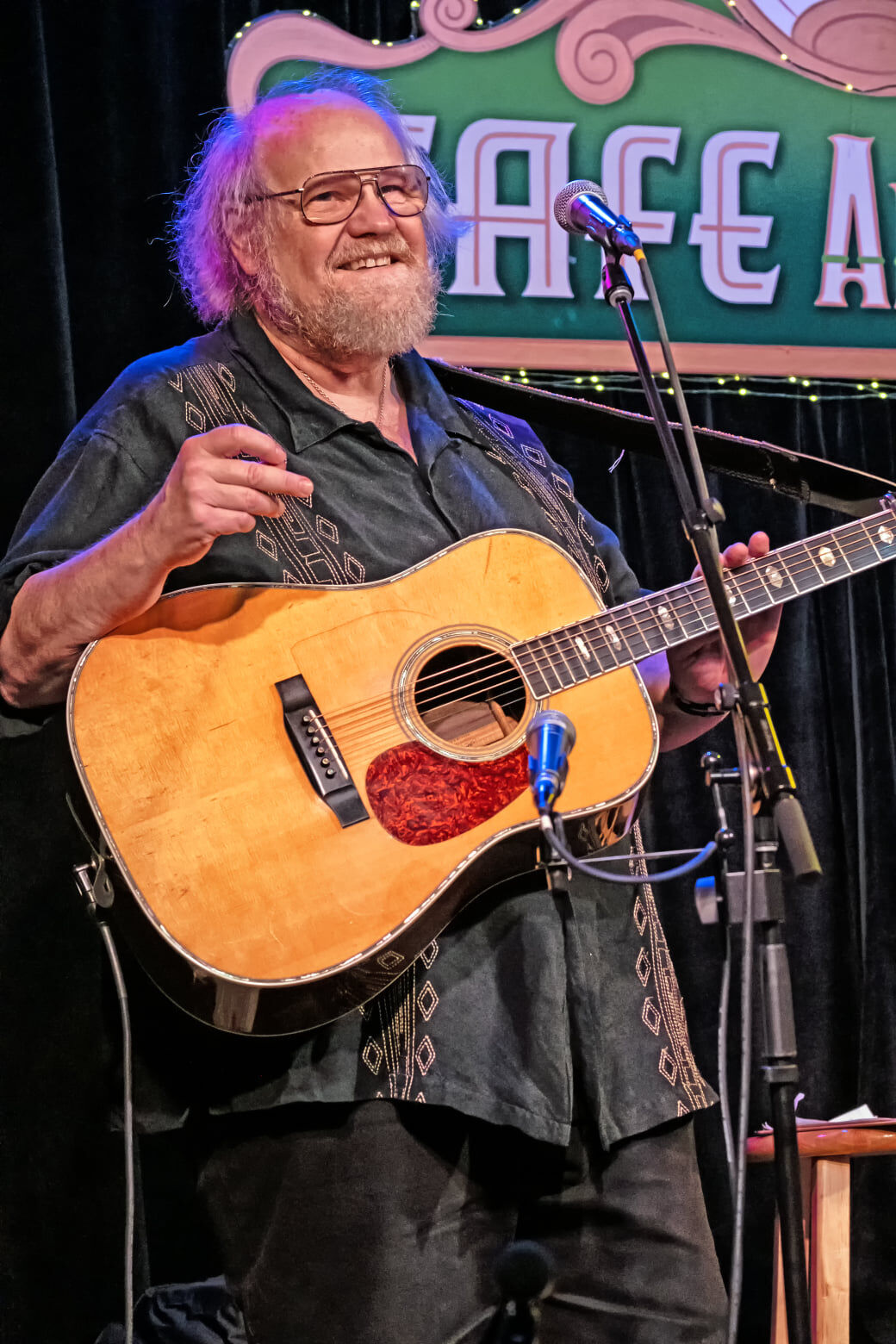 Folk singer, writer and radio producer Tom May will perform in concert and launch his new memoir Saturday at a concert in Long Beach. 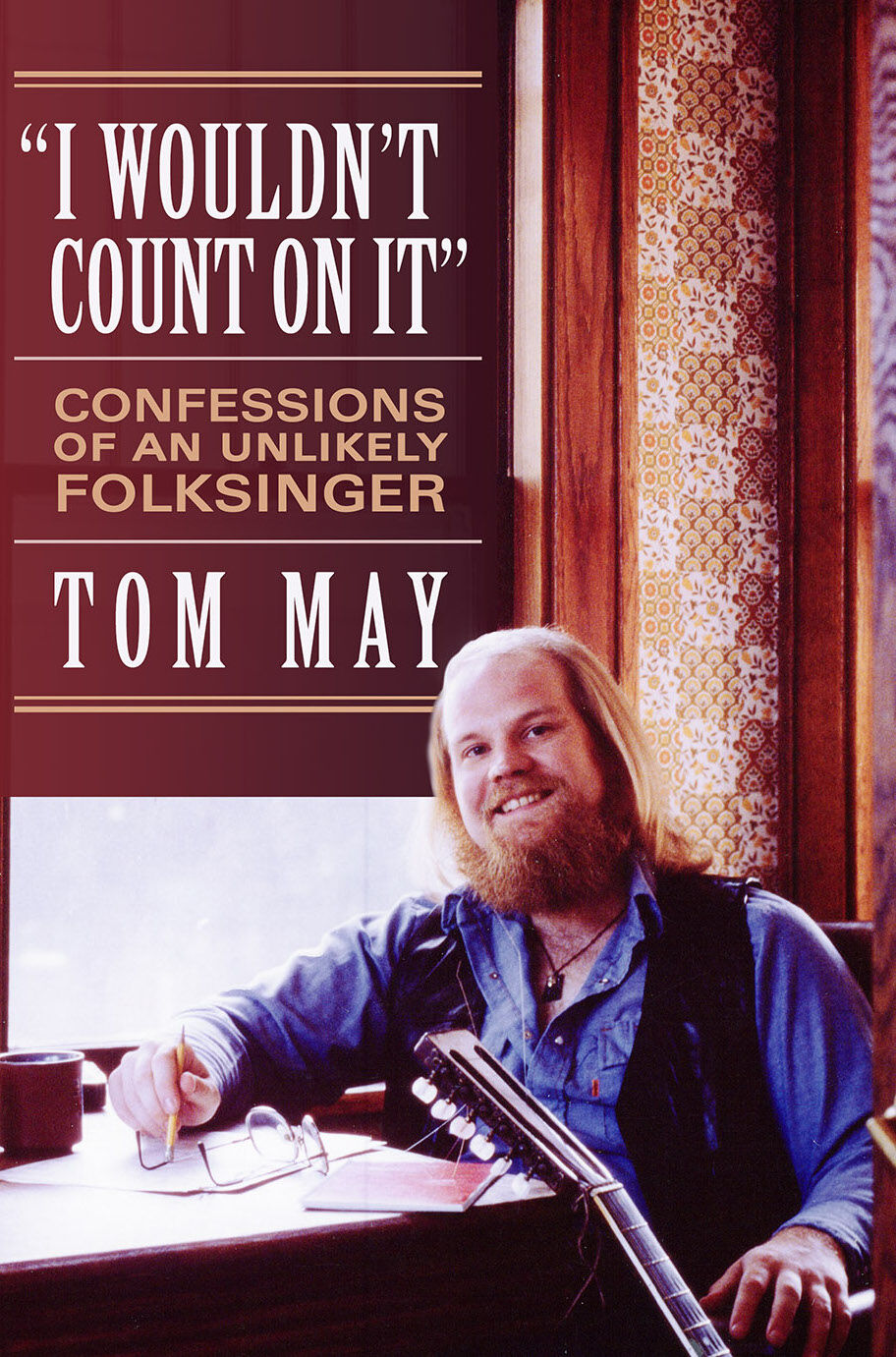 The cover of Tom May’s book ‘I Wouldn’t Count on It.’ 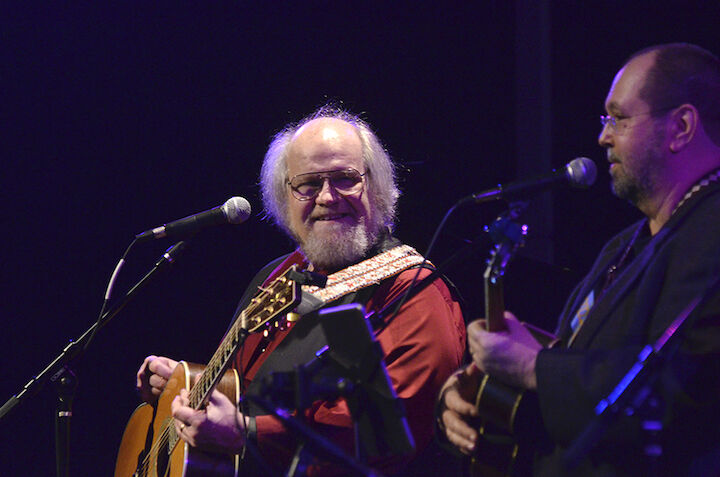 Tom May, left, pictured in a past performance with his longtime bass player Donny Wright.

Tom May calls his 50-year musical career a “life in song.”

But the subtitle of his new memoir, “I Wouldn’t Count On It,” is “Confessions of an Unlikely Folksinger.”

The 68-year-old Northwest musician is returning to Long Beach, Washington, for a concert and book signing 4 p.m. Saturday.

He will perform at the Peninsula Performing Arts Center, which has an outdoor tent next to its building at 504 Pacific Ave. N. Three prior dates were canceled because of COVID-19 health concerns.

May’s memoir was published in 2020, but promotions were derailed when the coronavirus shutdowns began. The Long Beach concert will double as a delayed book launch party. He describes it as “374 pages of stories, songs, travels, romantic blunders — and wine.”

The “unlikely” in the subtitle refers to his background, growing up in rural Nebraska. His parents, who had survived the Depression, gave him little encouragement. “There was no music in the household,” May said. “My folks were quite prosaic people. They focused on what they needed to be able to survive.”

Hearing a guitar at age 13 and liking the sound, he took lessons through school and privately, paying for them with money earned on his newspaper delivery route.

Folk music’s heyday was during the 1960s and 1970s, led by performers like Pete Seeger and Tom Paxton who May encountered.

“It held a lot of appeal for me because it is very genuine. It was the perfect time to make my living from it,” he said.

“It’s a very pure self-expression. It’s like a lot of kids that play soccer around the world, you don’t have to have much to be able to do it.”

The storytelling element attracted him, as well as, “Putting thoughtful energy into the world through my lyrics and songs,” he said.

May labeled his career, “the incredible opportunity of travel, freedom, and to meet new, fascinating friends over nearly 50 years on this musical highway.” He has performed as a solo artist in all 50 states, throughout Canada and in Europe. He opened for Gordon Lightfoot numerous times in the early 1970s and for Alabama and Willie Nelson. “Many of my songs are about people I have met along the way,” he said.

He has lived in Nebraska, St. Louis, Boston and Toronto. He moved to the Pacific Northwest in 1996 and first performed in Astoria at the Labor Temple the following year. Later appearances included the River Theater and the Performing Arts Center.

He has played with the Omaha Symphony Orchestra, and during the late 1990s appeared at Alaska concerts to mark the centennial of the Klondike Gold Rush. He also performed at the 2002 Winter Olympics in Salt Lake City.

He has released 14 albums and is producer and host for a continuing national radio broadcast, “River City Folk,” which spawned a cable TV show he hosted for a network in Branson, Missouri.

He also created Winterfolk, Portland’s largest acoustic music event, which has helped raise money for programs to aid the homeless. Both it and the radio show date back to the 1980s. Winterfolk was canceled in 2020 but is poised to return at the Alberta Rose Theatre in February.

While May enjoys playing his acoustic guitar, his 12-string and occasionally a penny whistle, his gratitude prompts him to want to help others. “It has been an incredibly uplifting experience,” he said. “I have been so blessed to travel to every state and just about every Canadian province.”

His first book was “Promoting Your Music, The Lovin’ of the Game,” and included a lengthy interview with Lightfoot. It was co-written in 2007 with Dick Weissman, a composer, banjo player and writer based in Portland. Weissman lived in Astoria in the early 2000s while teaching at Clatsop Community College.

“To encourage other musicians is my mission,” May said, noting that encounters with performers like Lightfoot and Seeger, known for assisting others, inspired him.

“Tom’s show has been a long time coming,” said Svendsen, who runs the Peninsula Arts Center where May first performed in 2012 and knows him from Winterfest. He noted this appearance has been scheduled then canceled three times. “It’s great to see it finally happening.”

May agreed. “It is always a treat to come back and perform,” he said. “I am delighted I am going to be getting to do that.”

Tom May in concert

Reservations by email to events@peninsulaartscenter.org or call Bill Svendsen at (360) 901-0962.