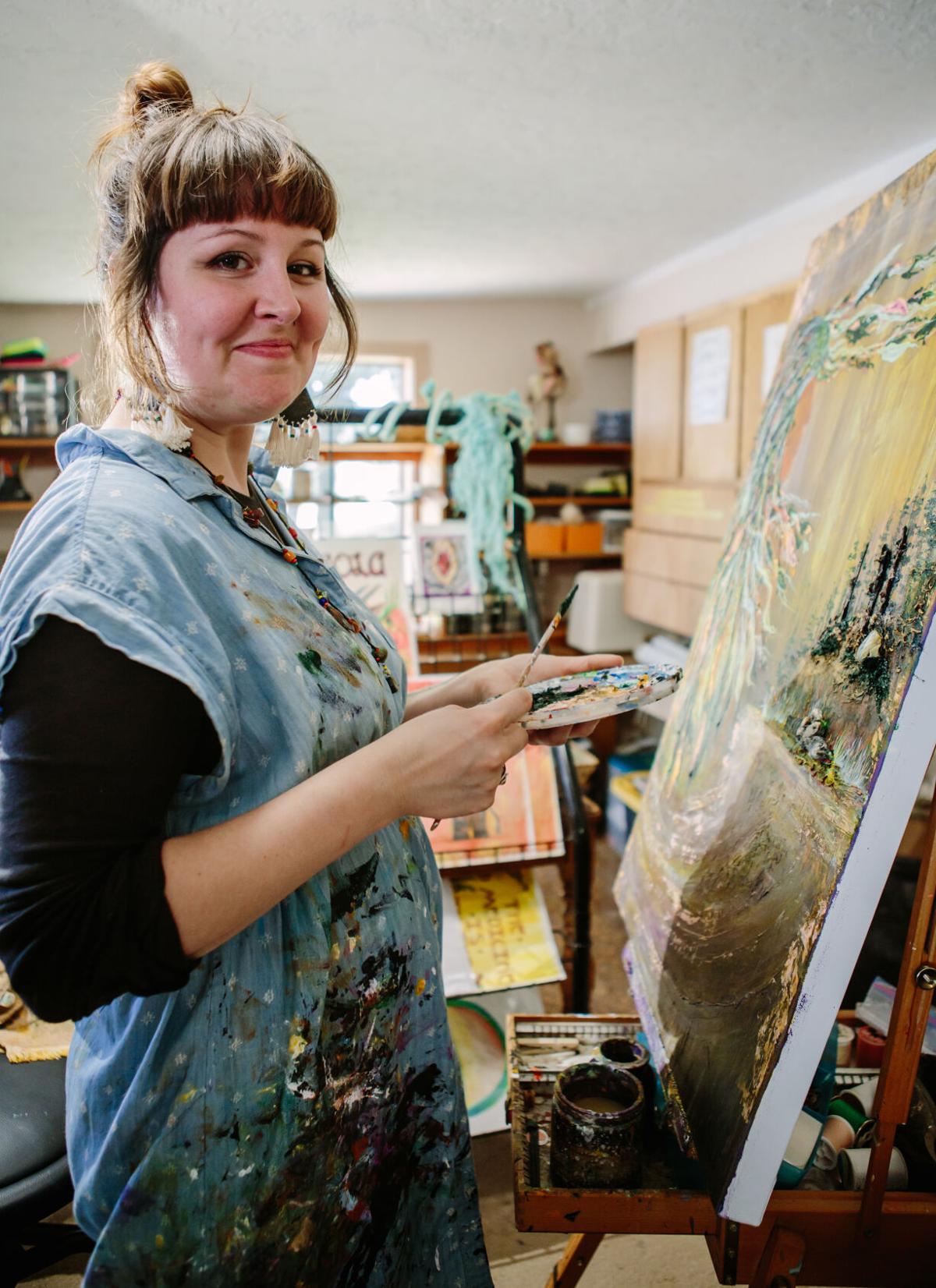 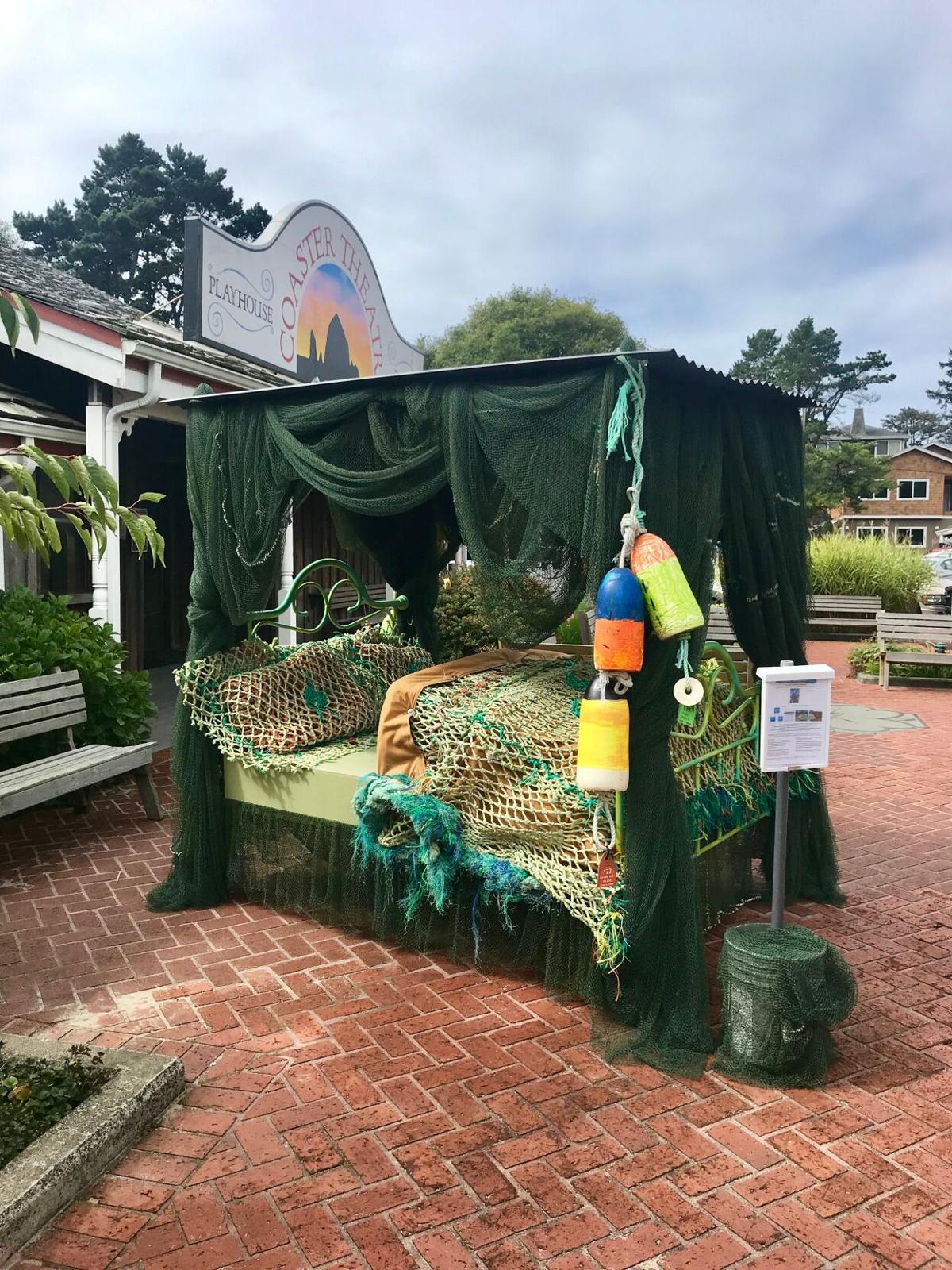 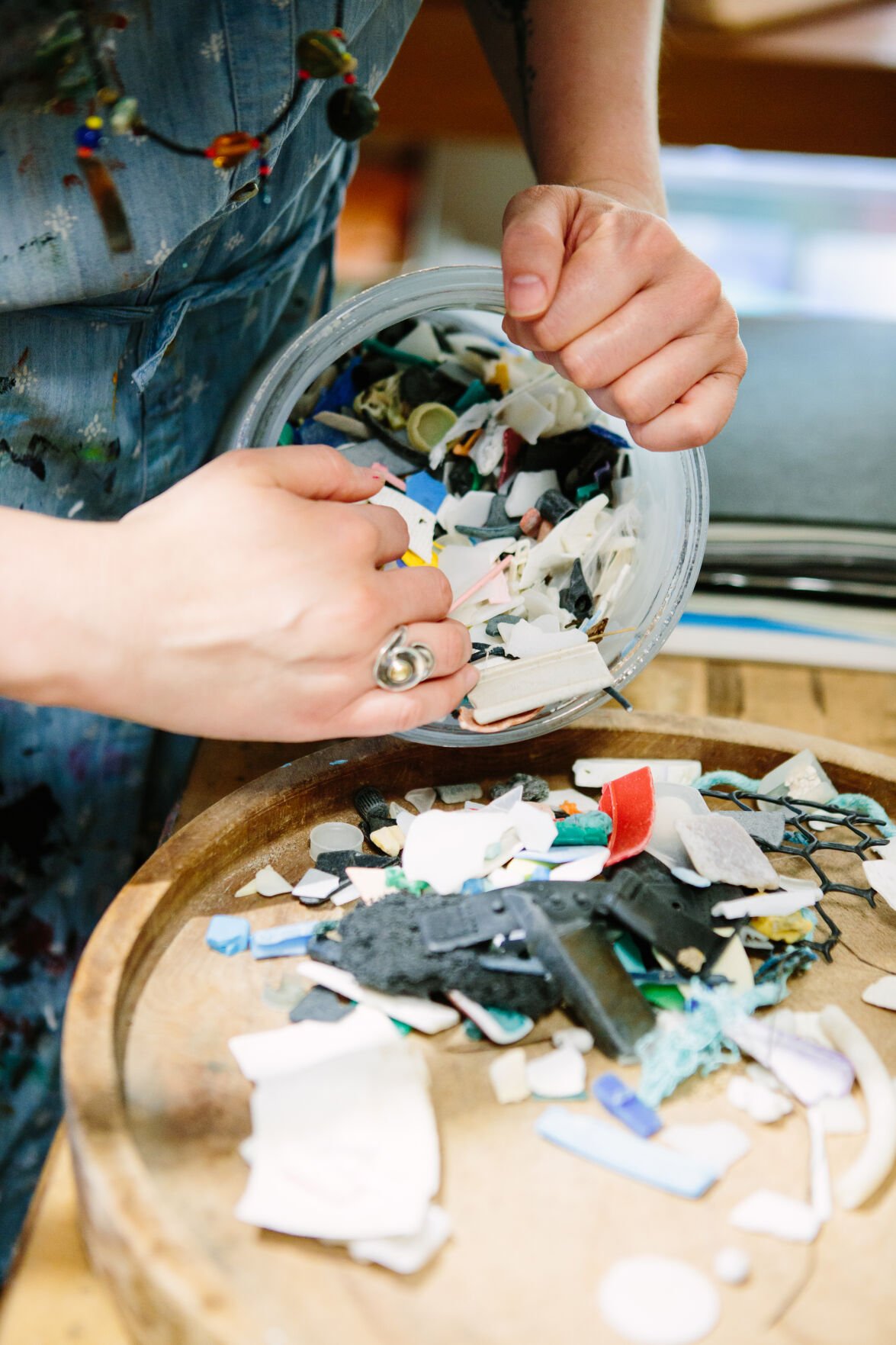 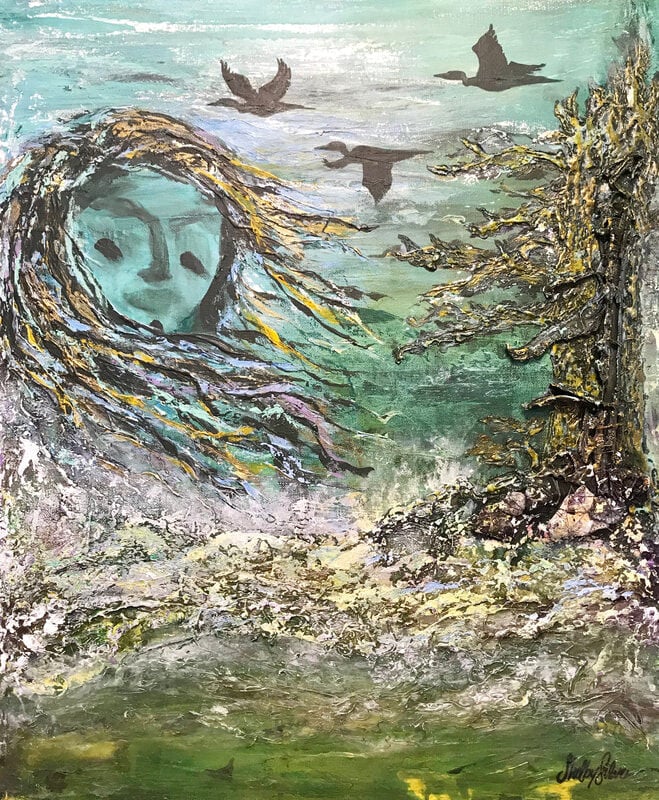 ‘The Sacred' by Shelby Silver. 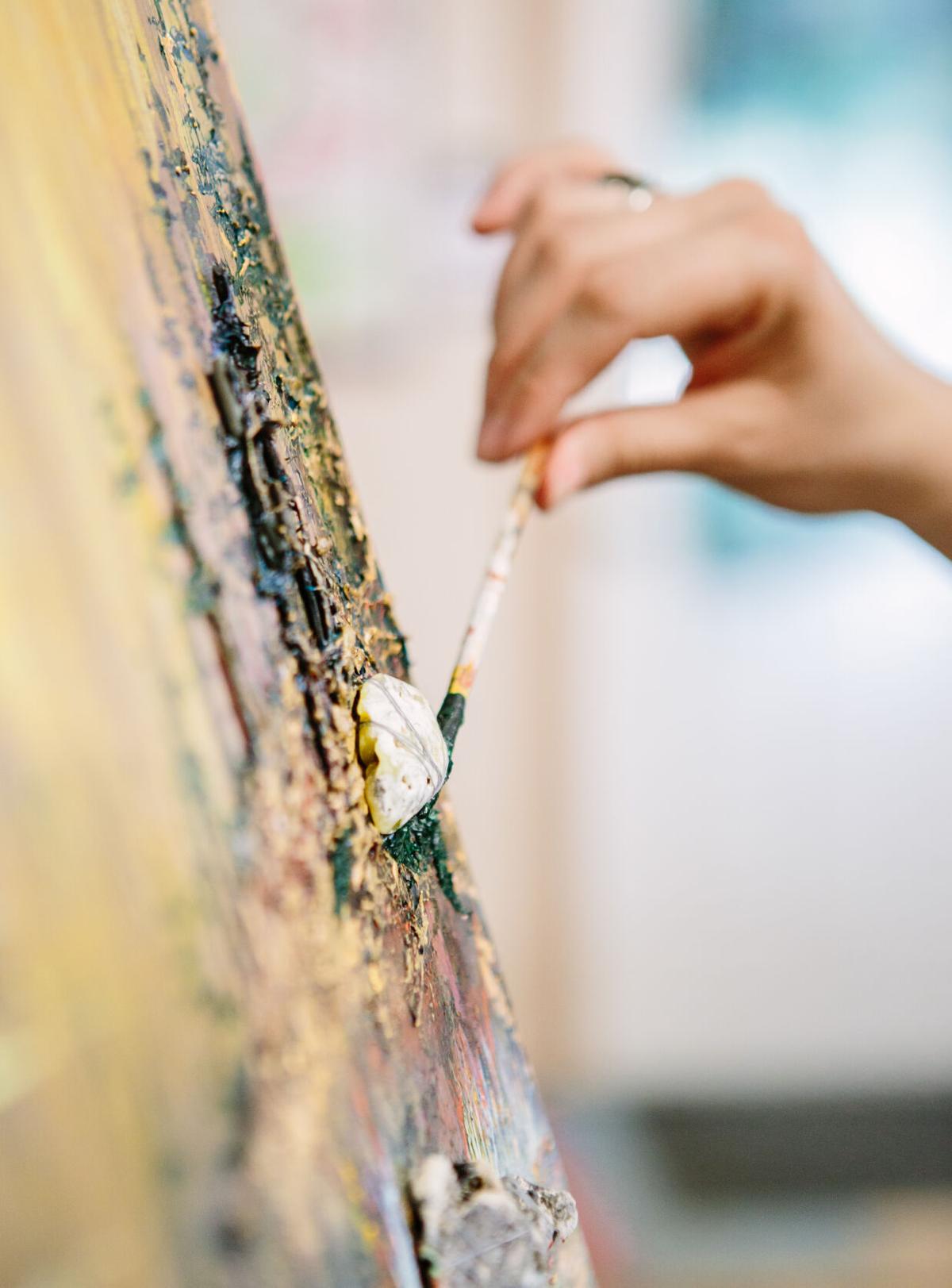 Shelby Silver uses a wood knitting needle as a paintbrush. 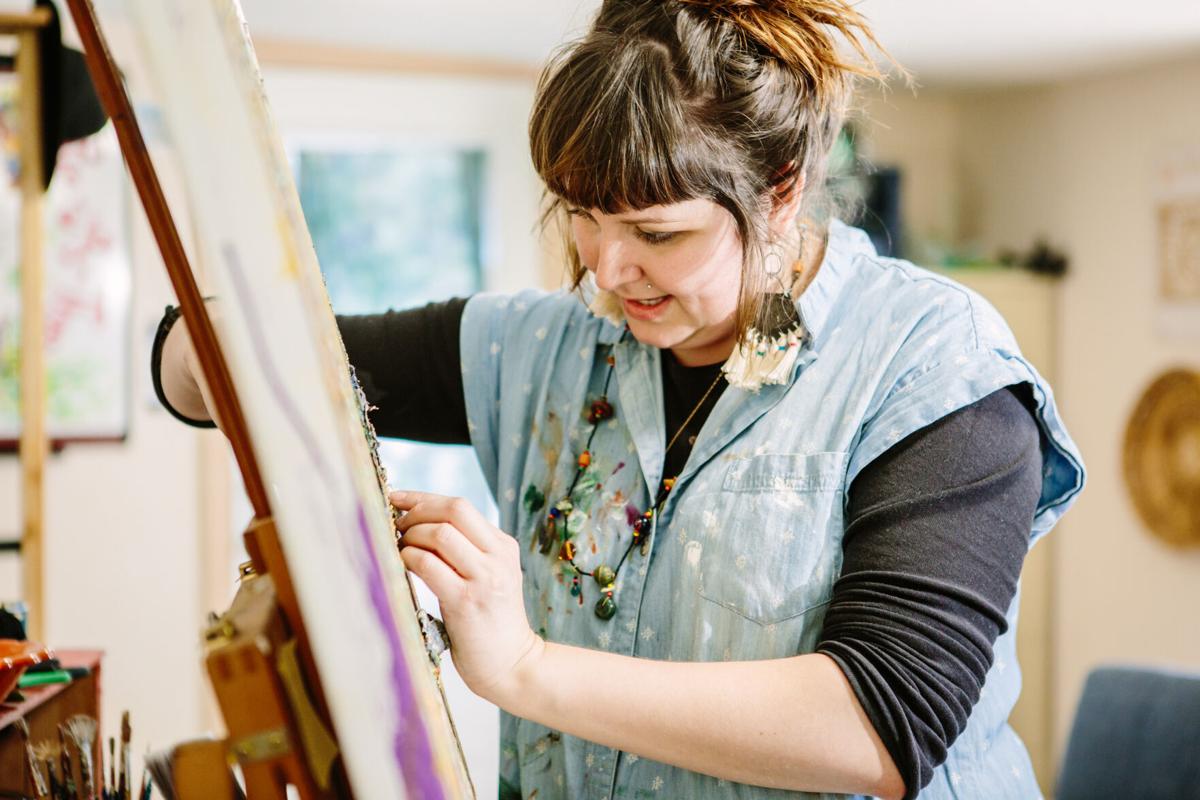 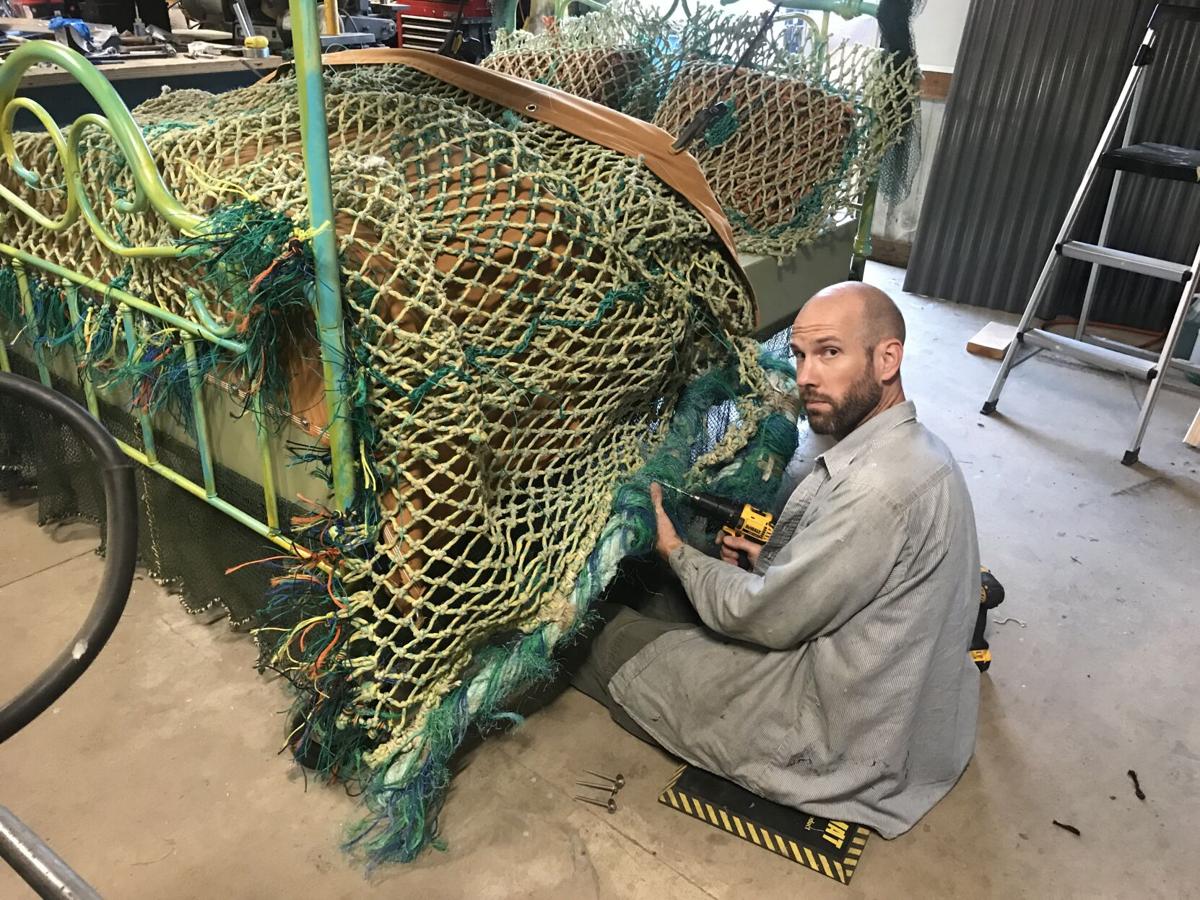 Christopher Carsner works on his and Shelby Silver’s art installation.

Somewhere along the coast, Shelby Silver wades through the sand, scanning the wrack line for any treasures that washed ashore.

As she sifts through strewn pieces of seagrass and kelp, Silver finds what she’s looking for: plastic marine debris. Collecting the scattered bits one by one, she plops them into a container before continuing her trek along the waves.

“If I want to really bring in the raw feeling of the ocean into my work, I will not wash them because I want that energy of the ocean to still be felt,” Silver said.

Silver is an Oregon-based ecological artist who repurposes recovered items in her artwork, such as plastic marine debris and fish netting. Her art has appeared in galleries throughout the state, including in Astoria, Seaside and Cannon Beach.

Silver started working in ecological rehabilitation 10 years ago. She works as a marine conservation and ecological art educator, and has held several educator positions.

A native of Grays Harbor, Washington, Silver spent much of her childhood between the Wishkah River and Copalis Crossing. For as long as she can remember, she has found herself looking for things on the beach. She traces her upcycling and stewardship values to her mother.

“She is a Jenny of all trades so she would do all kinds of things,” Silver said.

Silver grew up on a llama ranch. Her mother assumed the role of an on-call animal midwife, helping llamas in labor. Silver and her sister assisted as needed. Apart from delivering baby llamas, Silver’s mother had many side gigs, from cutting children’s hair to helping fishermen in the Westport Marina in Grays Harbor repair fishing nets. Silver said her mother demonstrated how to care for the planet.

Her mother’s lifelong expertise as a seamstress and tailor also impacted Silver. An influential part of her youth, Silver said, was becoming a fiber artist at an early age. She and her sister were the youngest members of their local fiber guild. At one point, the eldest member in the guild was 83 years old. In comparison, Silver and her sister were respectively 9 and 7 years old.

“I never questioned whether or not I could actually physically accomplish something. I’ve just known that no matter what it is that I want to get done, I’ll find a way,” she said. “We didn’t have much money growing up, but necessity is the mother of invention.”

Rooted at the heart of Silver’s work are overarching themes of marine conservation and upcycling. Each of her pieces convey the importance of protecting oceans and the ecosystems within them.

In her painting “The Sacred,” Silver uses vibrant hues of blue and green acrylic paint. An outline of a person can be seen in juxtaposition with a towering tree as birds soar overhead in the background, illustrating the interconnected relationship between humans and nature. She sewed in pieces of plastic marine debris and then tamped them down with a heavy gel medium, further adding texture and impact to her work. Her painting was featured in SouthWest Art Magazine in June 2019.

Silver also creates sculptures and installations that make heavy use of recovered fish netting and retired marine rope. She partners with the Kauai chapter of the Surfrider Foundation, a nonprofit dedicated to marine conservation and activism. The foundation recovers roughly 10,000 pounds of marine rope off of beaches every month. The foundation sends Silver boxes of the reclaimed items. She also works with Westport Marina to claim the retired mounds of marine rope and fishnets.

One of Silver’s installations, “We’ve Made Our Bed,” used the remnants of more than 1,000 pounds of marine rope and netting. The base of the piece is an old brass bed frame that she had been using as a guest bed. Always thinking on how items can be reused, Silver transformed the frame into a themed work of art, intricately decorated with reclaimed ropes and nets. The installation was featured in the Earth & Ocean Arts Festival at Cannon Beach in 2019.

The installation was crafted in collaboration with Silver’s partner, Christopher Carsner, who is a divemaster. The pair met in 2015. When they were working on the piece, Carsner thought back to an exploratory diving trip he took around the San Juan Islands. At one point in the trip, he stumbled upon a house-sized fishing net that got caught on an underwater pinnacle, waving like a flag in the water. As he looked down into the net, Carsner saw fish, crabs and other creatures stuck in the netting. He cut out and freed those he could.

“Entanglement, entrapment of our marine species and animals. It kind of hits home for me,” Carsner said. “Working on the bed was definitely a reminder that all this stuff is out there in the ocean. It’s floating around, it’s trapping marine life.”

Last September, Silver received her general studies associate degree from Portland Community College. Now, she is a full-time student working toward a second degree and majoring in gerontology, a study of aging in all its forms. Drawing parallels between humankind and the Earth, Silver hopes to one day become an ecological psychologist and gain a more comprehensive understanding in the cycles of life and nature.

“I will continue creating and will bring my work as an ecological artist forward,” Silver said.