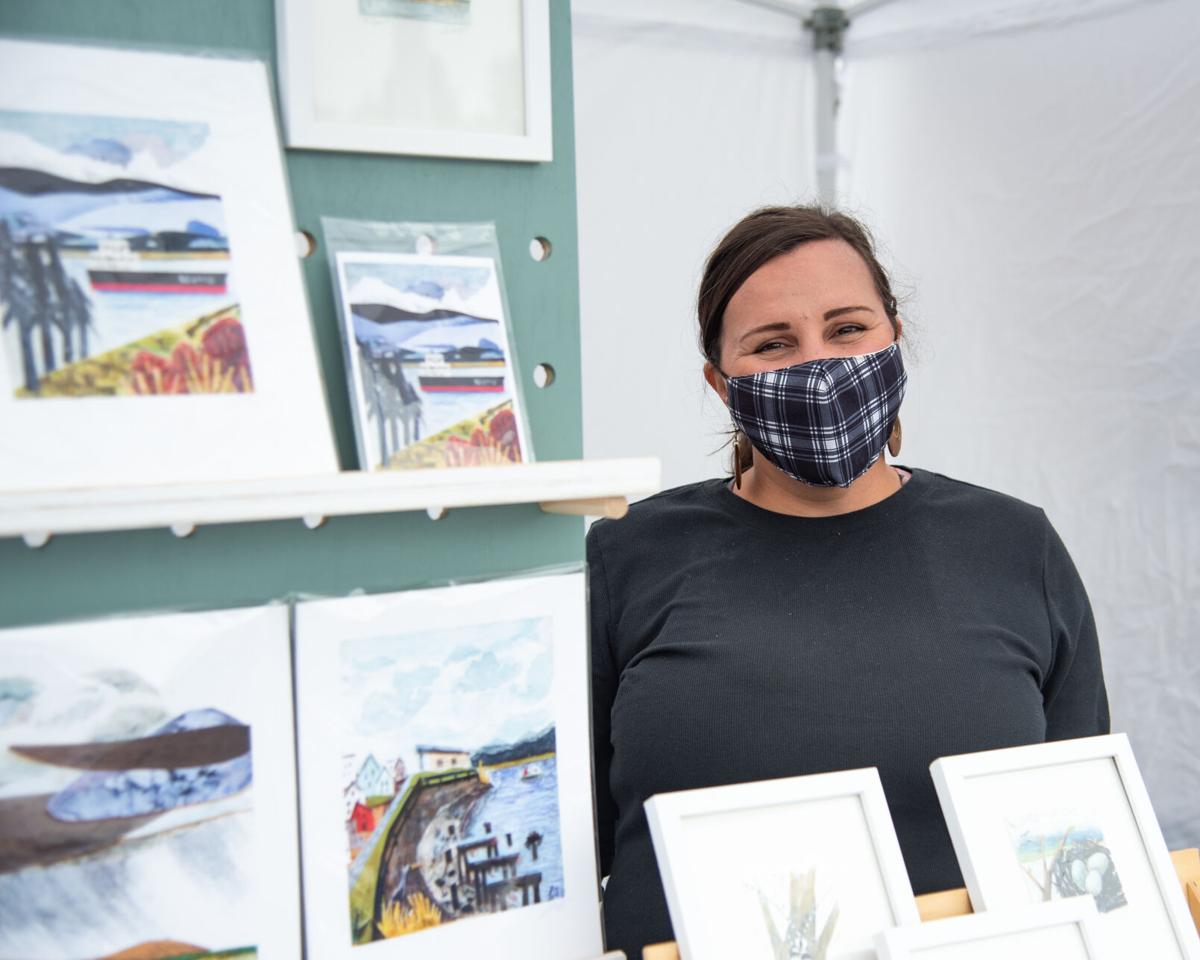 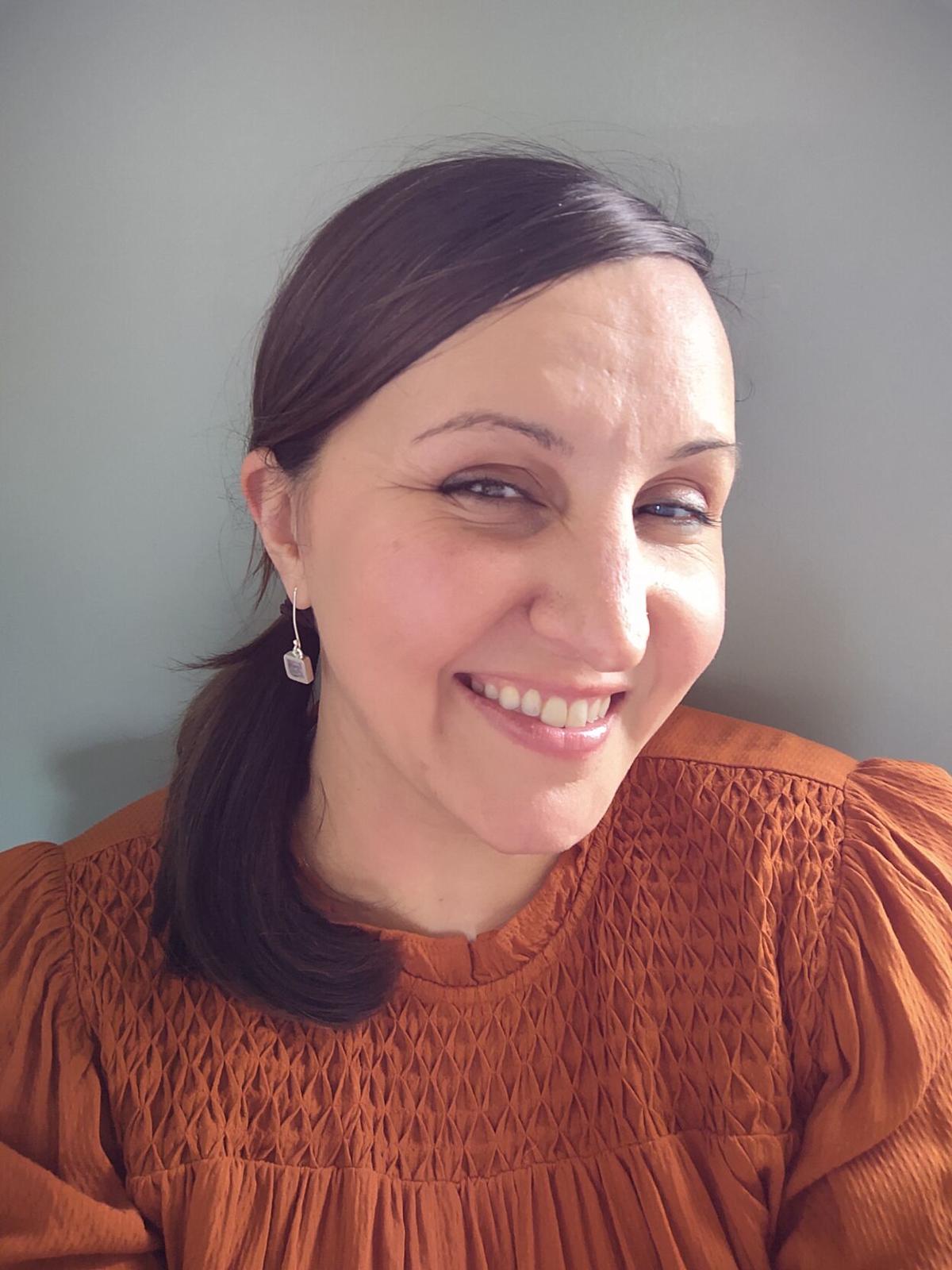 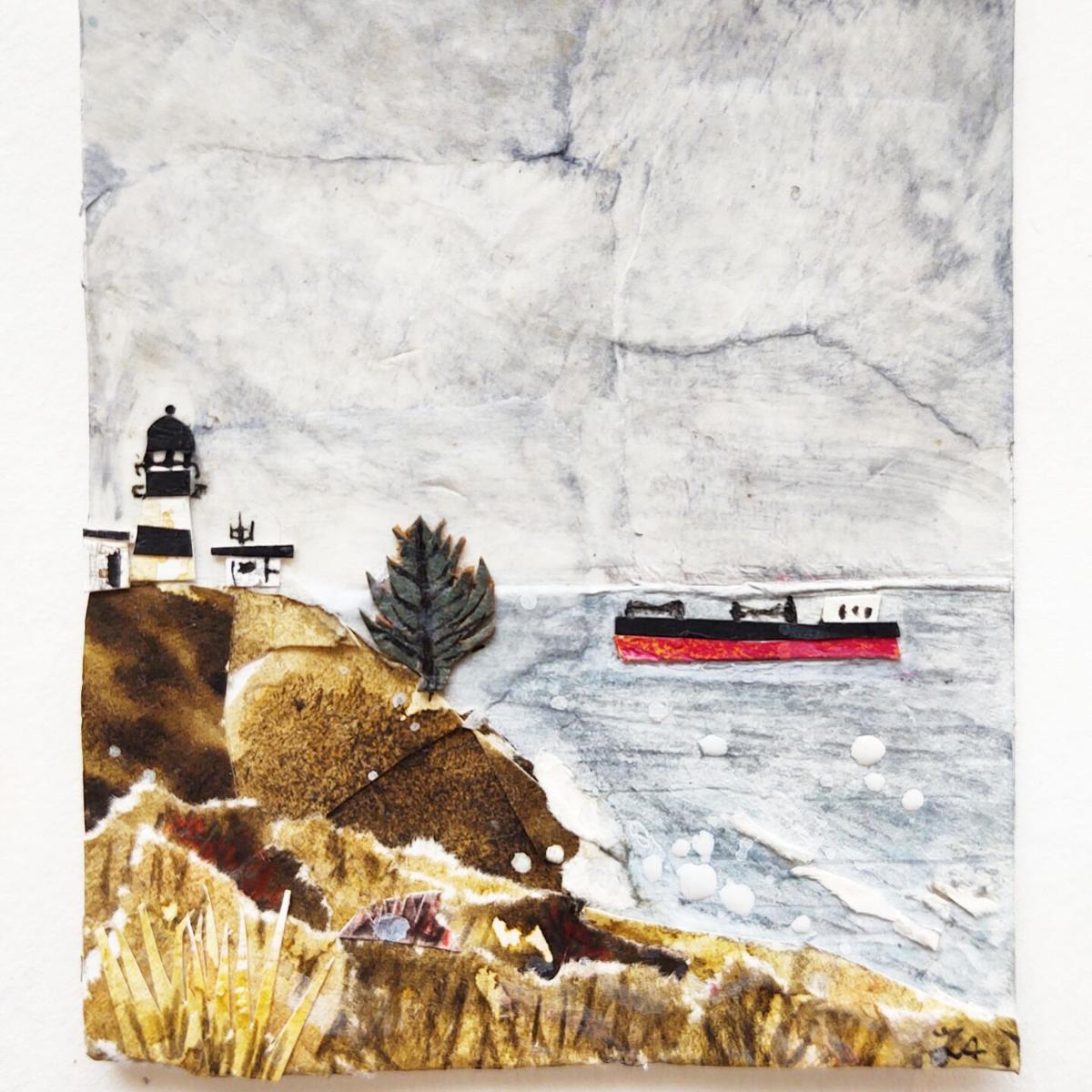 A collage of Cape Disappointment, Aarts made during the 100 Days Project. 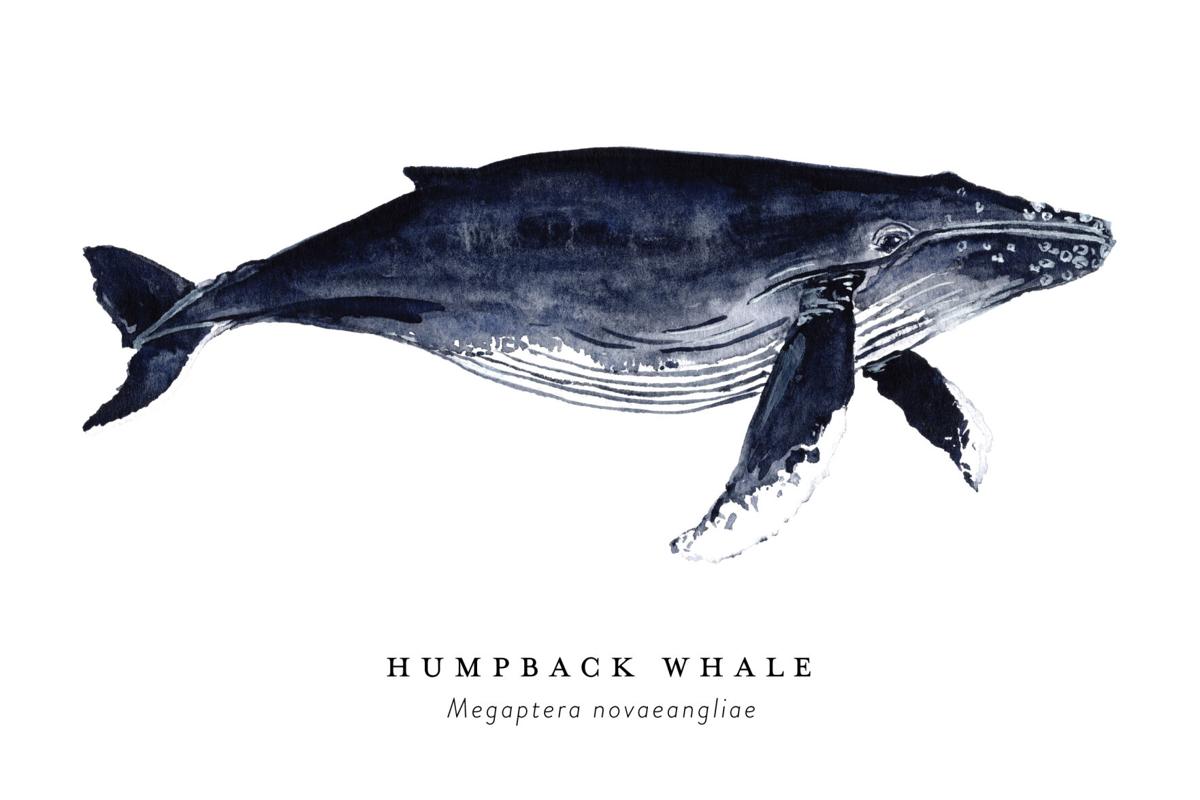 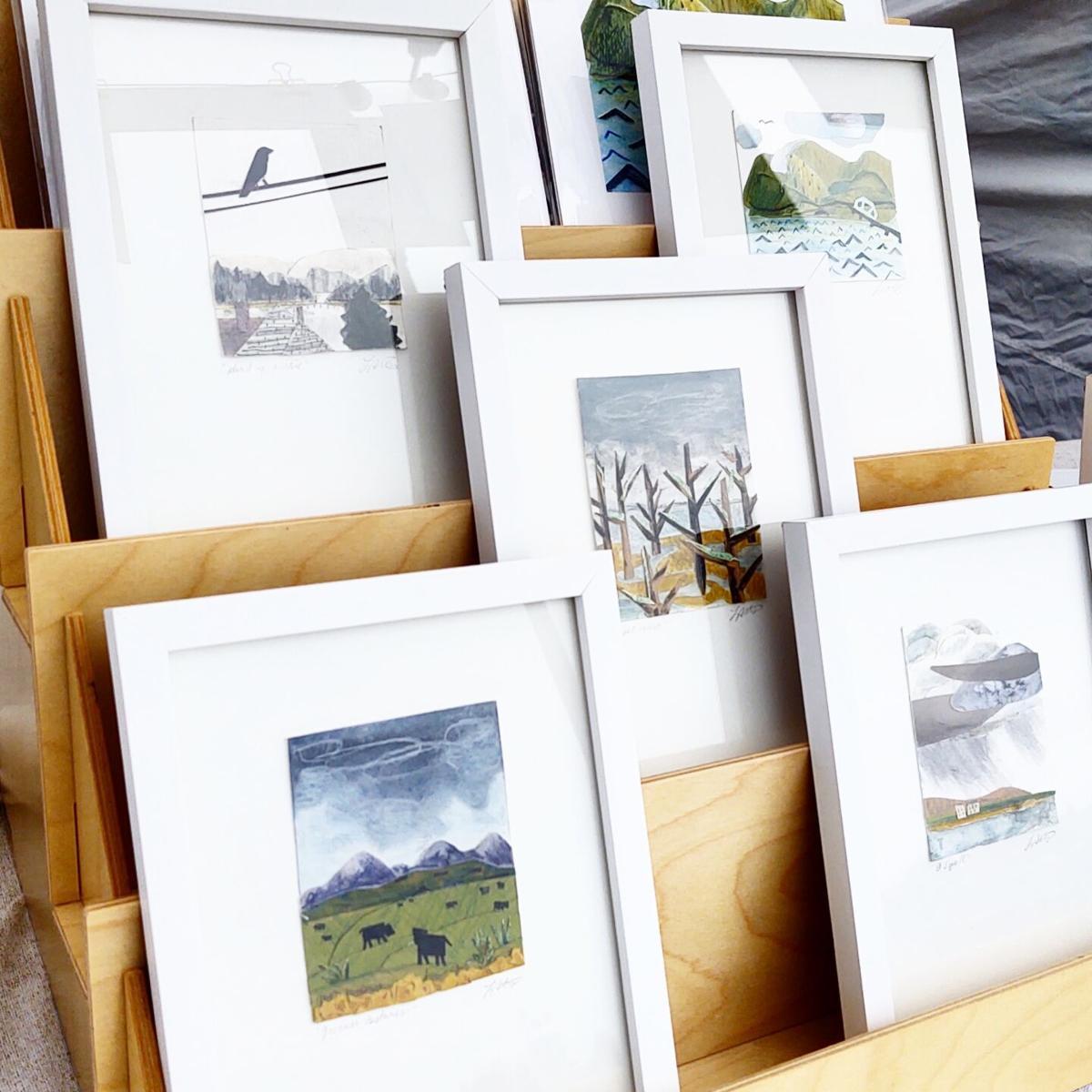 Aarts’ pieces on display at the Astoria Sunday Market. 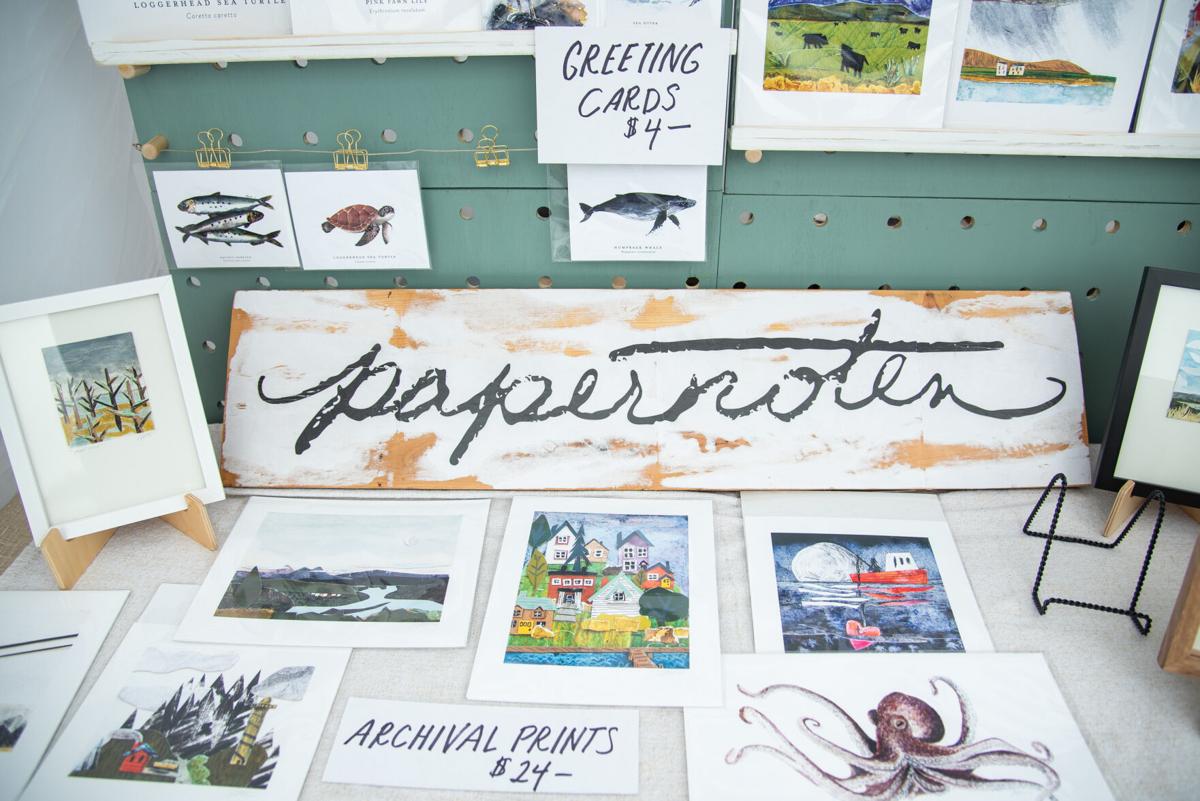 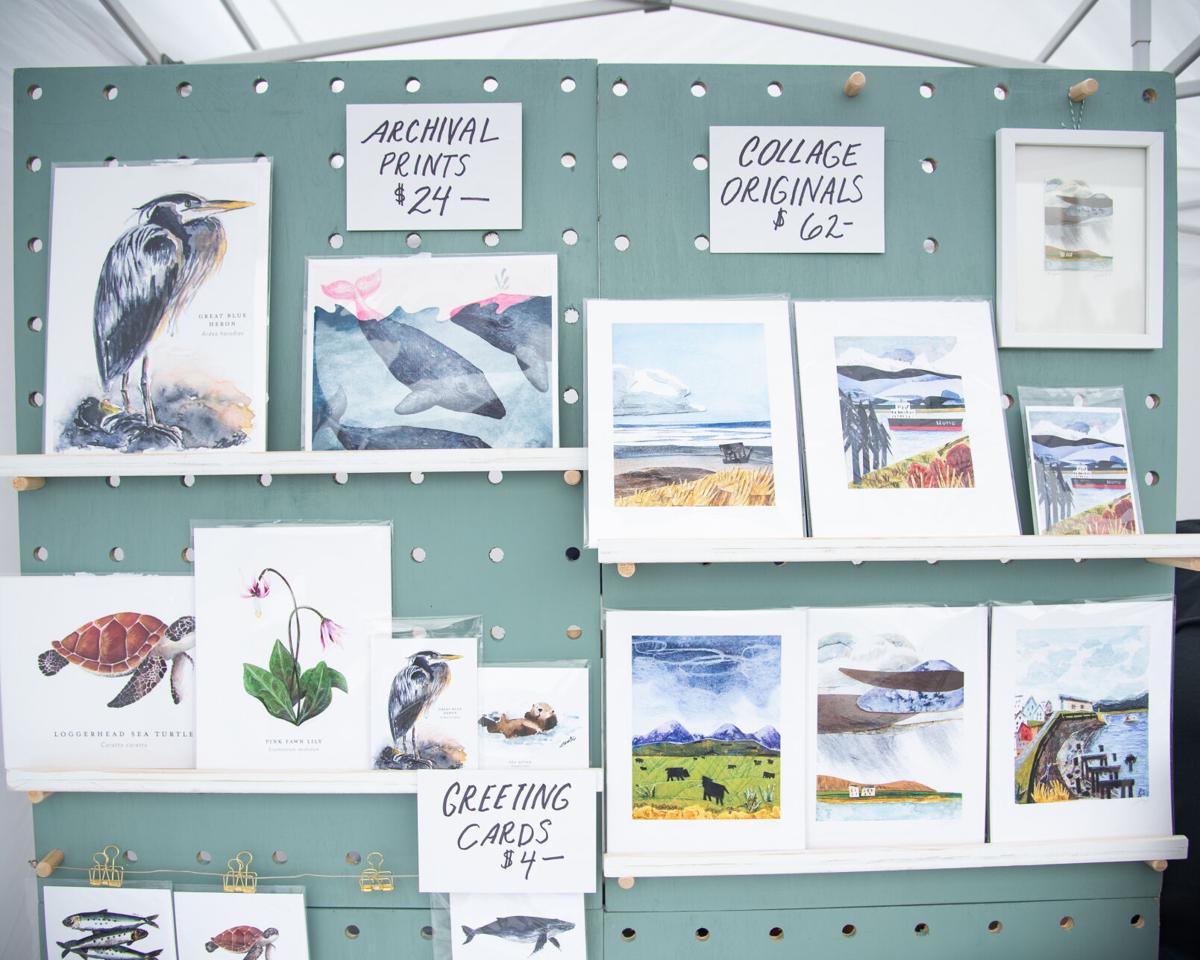 Whether she is making a collage of Cape Disappointment or a watercolor painting inspired by whale watching, Astoria-based artist Lindsey Aarts can often be found creating vivid illustrations of coastal-influenced scenes.

Originally from Florida, Aarts moved to Astoria in 2017 and started her stationery business, “Papernoten.”

“I’ve always kind of been a hobby artist,” Aarts said.

After she had kids, Aarts looked for something that would still keep her creatively engaged, which is how she got into graphic design projects. From there, her business took off. She has since been filling her days with creating vibrant landscape illustrations.

The name “Papernoten” is a play on words from the Dutch holiday cookie, “Pepernoten.” Aarts’ husband is Dutch, she said. Through getting introduced to Dutch culture and cooking, she heard about the cookie and connected the dots with how similar it sounded to “Papernoten.”

“It was the perfect name for a stationery store,” she said.

Aarts is working on the “100 Days Project,” an annual project she first participated in in 2019 where artists produce new pieces for 100 consecutive days throughout the year.

This year, Aarts has themed her 100 days around creating miniature, intricate collages of local natural scenes, including spots like Cape Disappointment and the Astoria coastline.

“It’s been a really fun project for me, I actually really enjoy it,” she said.

For her collages, Aarts builds her pieces mostly with recycled scraps of paper left over from magazines and other mediums. Aarts will also incorporate handmade pieces she colors with watercolors and colored pencils to fill in spaces where she doesn’t have scrap paper that works.

“I’m an artist, I always have scraps of paper,” she said. “ I don’t throw anything away.”

Over the years, Aarts said her style of art has evolved and gone through different iterations, ranging from watercolors to collages.

Throughout the years, a focus on the environment and love for the nature around her is something that has stayed consistent in Aarts’ work. She said she loves exploring themes of the environment in her work to share how beautiful and impactful natural surroundings are.

Aarts’ love for incorporating the environment into her pieces has really shined through in the 100 Days Project, she said.

“I’ve always been someone drawn to nature and to wildlife, I care very deeply for it,” she said. “I’m a total naturalist at heart.”

Growing up in Florida, Aarts was surrounded by wetlands. Now living in Astoria and being surrounded by the mountains and ocean (and going whale watching now and then), Aarts has found herself inspired by the rolling landscapes of the Pacific Northwest.

“I’m always inspired by all of it,” she said.

As she has watched the impacts climate change and humans have had on the planet, Aarts said she wants to reiterate through her pieces how important it is humans treasure natural resources.

Last year, she organized the Astoria Home for the Holidays event, a one-day online sale that brought together about 60 local vendors’ work to sell online to the North Coast.

“The idea was that it was all local. I had local artists and small businesses, retailers as well, all on one site so you could shop all the local makers with one shopping cart,” she said.

There was no shipping or delivery involved. Instead, customers picked up their orders curbside-style, Aarts said.

“One of the coolest things about the event was that all of these artists I didn’t know existed in Astoria found an easy way to put themselves out there,” Aarts said.

Based on the success of the event, she is thinking about bringing it back this year but nothing is set in stone yet.

This summer, Papernoten can be found on weekends at the Astoria Sunday Market where Aarts will have a booth most Sundays through the early fall.

Aarts said once the 100 Days Project wraps up, she’s looking forward to focusing even more on the environment in her pieces and working on a collection of watercolor collages.