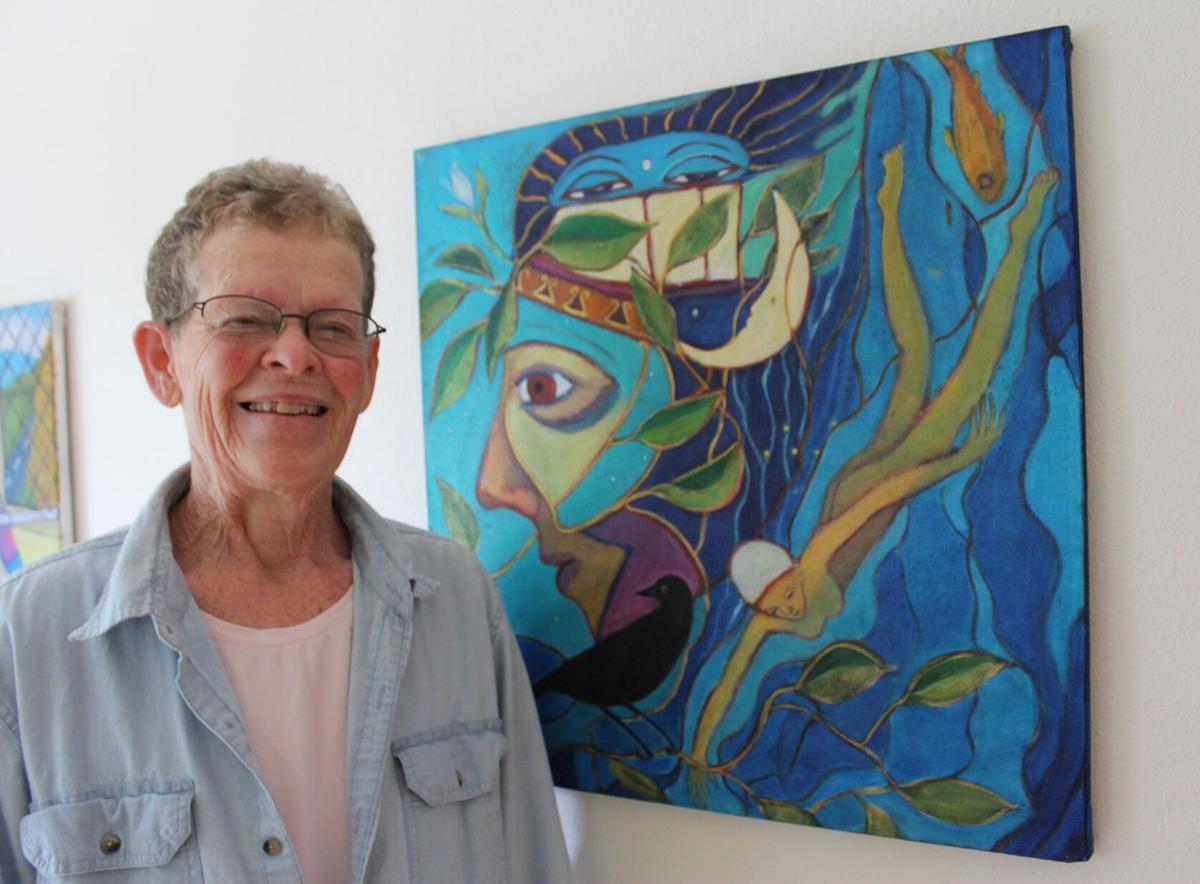 Luana Stauffer stands next to her self portrait, ‘The Swimmer,’ which captures the rich blues of the waters of Hawaii where she spent 16 years in the shadow of an active volcano. 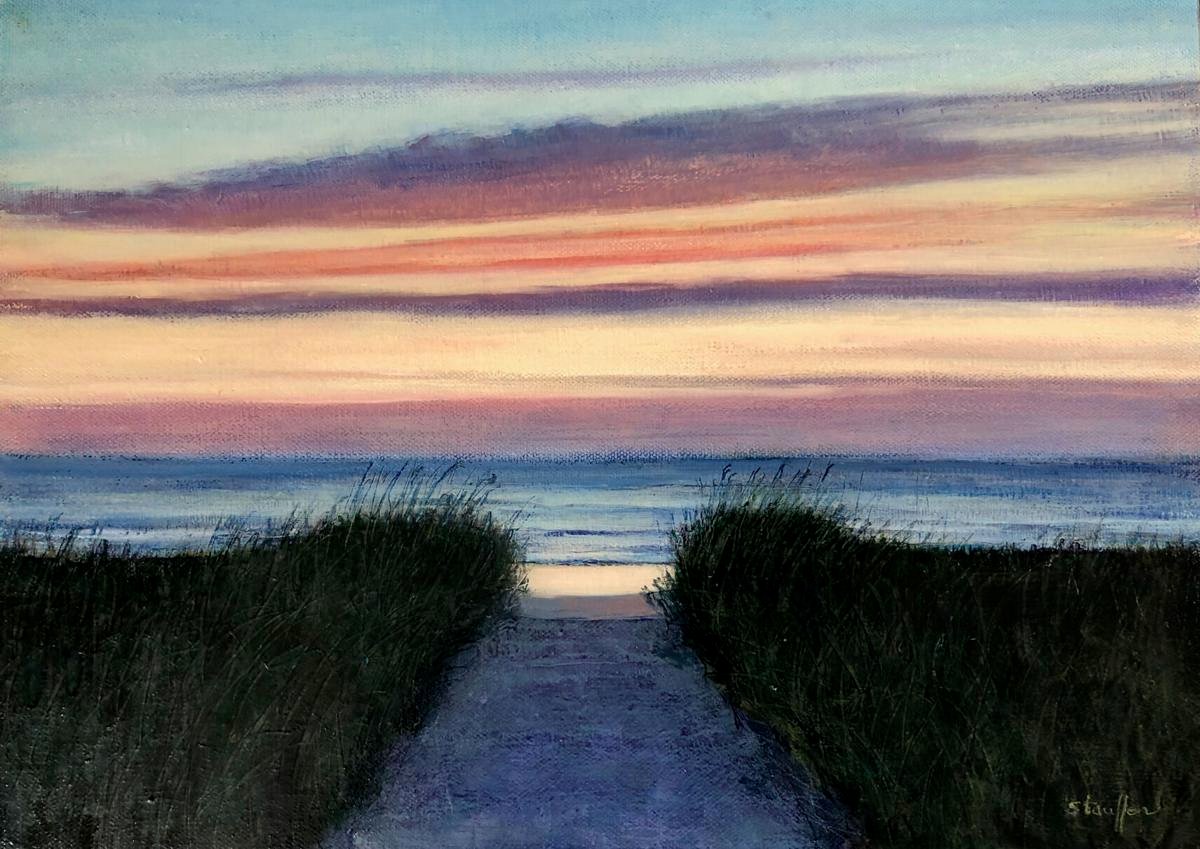 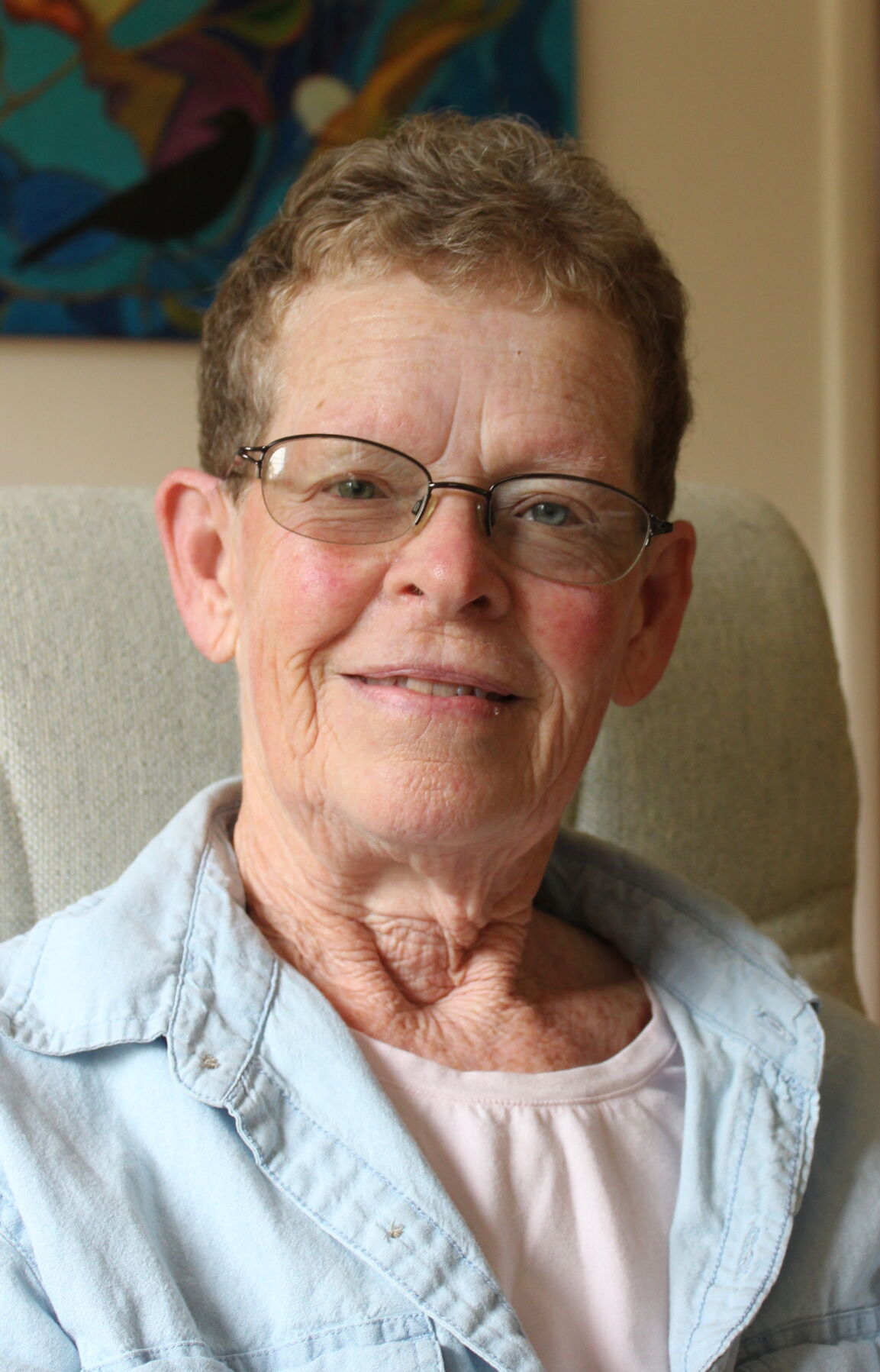 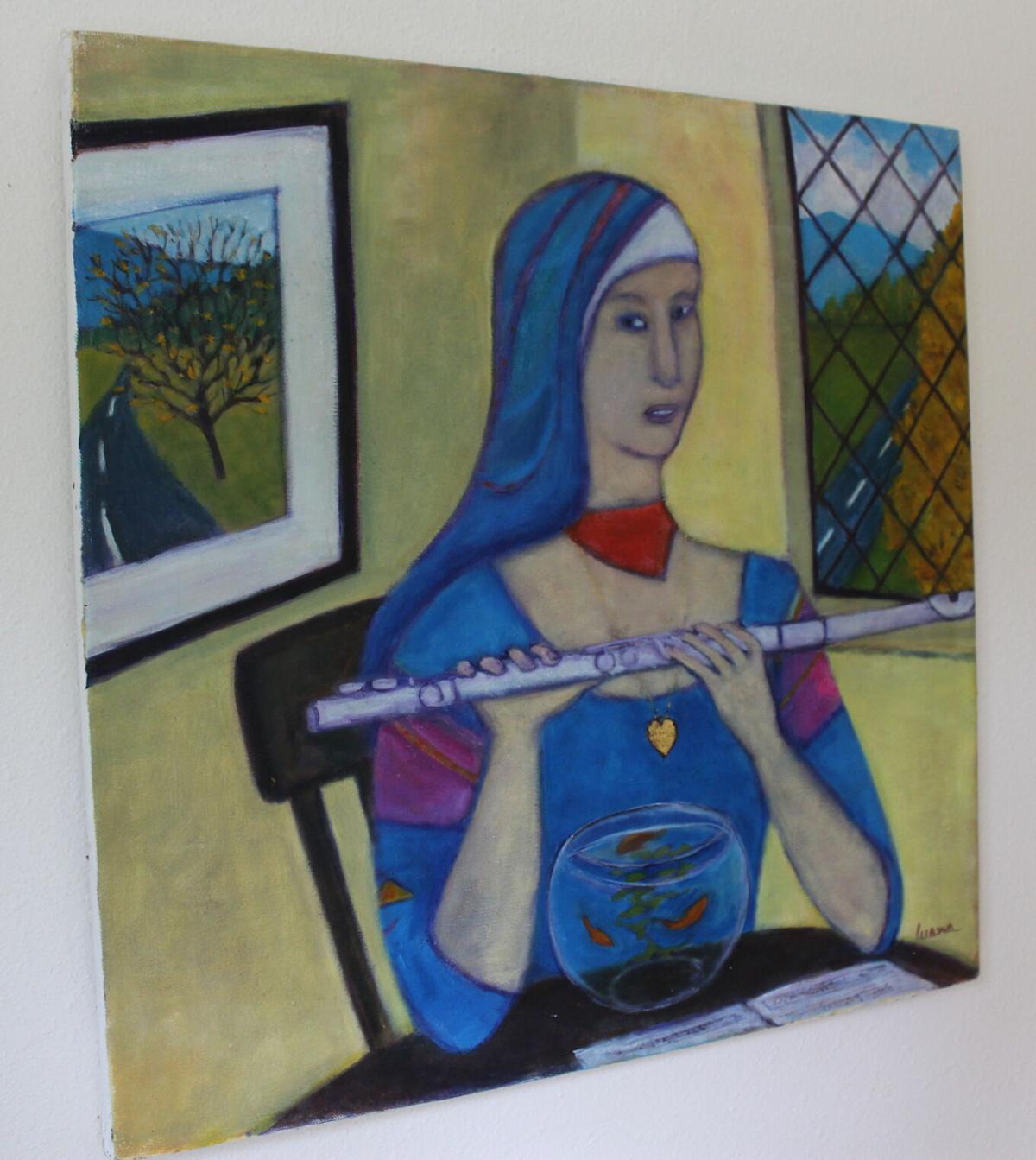 A self portrait of Luana Stauffer as a teenager. She left Corvallis for the East Coast to attend college. 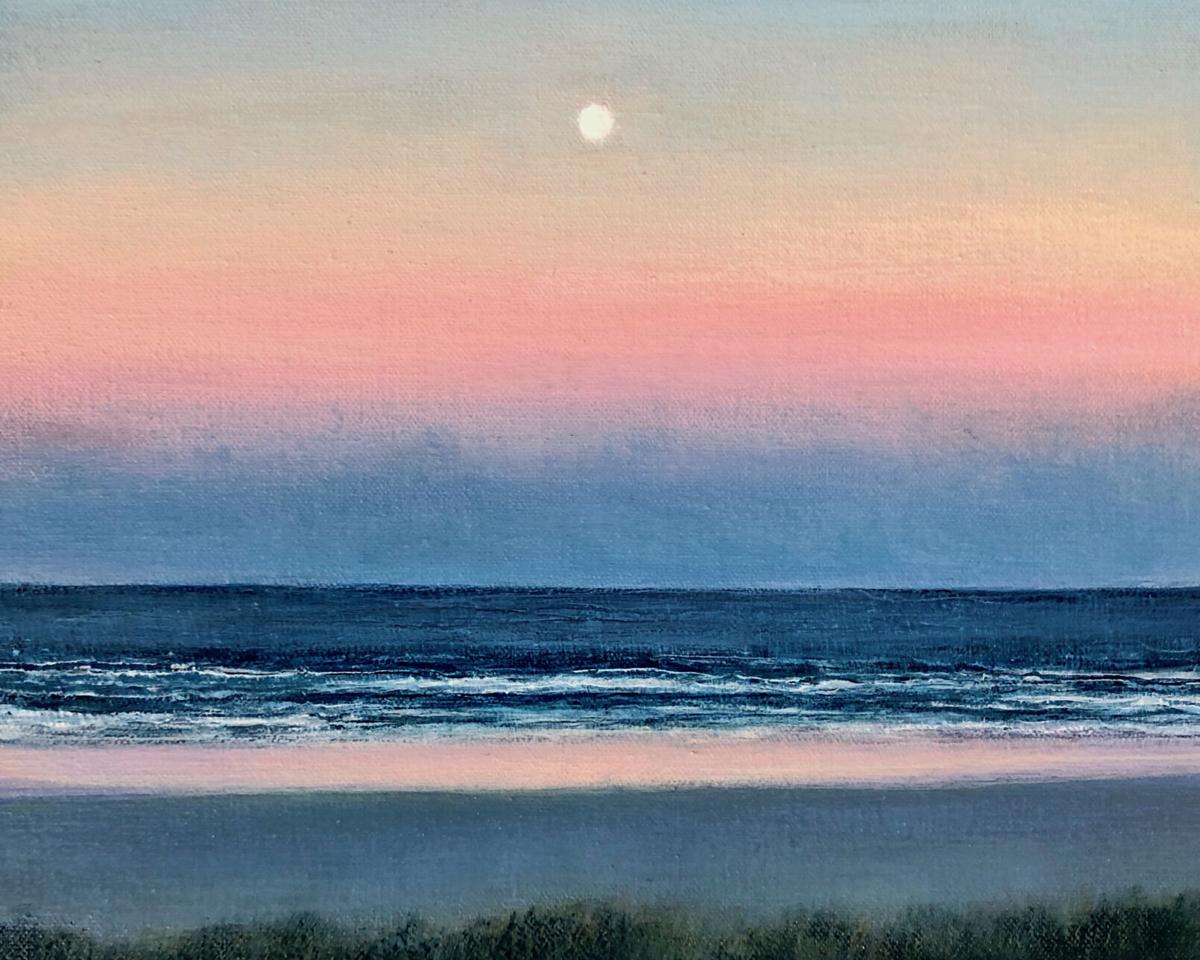 Art is a journey and local artist Luana Stauffer has taken many paths.

After a hiatus from public showings, 75-year-old Stauffer, of Ocean Park, Washington, is displaying her art once again. Her “pandemic lockdown creations” are available to view at BOLD Coffee, Art and Framing in Long Beach, Washington.

Her collection includes oil paintings that depict the Pacific Ocean from vantage spots like the northern end of the Long Beach Peninsula and Willapa Bay.

The delicate colors of clouds and the mystery of their depth have fascinated artists like Vincent Van Gogh and Paul Cézanne, inspiring unique paintings. Stauffer’s adorn the walls of the Ocean Park cottage she shares with her partner Chuck.

Stauffer grins broadly as she tells of finding peace and joy creating on canvas.

“I had a troubled childhood and past,” she said.

Stauffer’s father served in the U.S. Navy during World War II. Her parents moved from Hawaii to Corvallis before she was born. Hawaiian mementos around her family home and memories of vacations to the islands would prove a later draw.

Amid landscapes, one painting of a girl with long covered hair exposes teen years soothed by melodies on her flute. The painting depicts Stauffer as a teenager.

Stauffer left the Pacific Northwest to attendMount Holyoke College in Massachusetts, one of the “Seven Sisters” liberal arts institutions.

“I wanted to go far away,” Stauffer said. “It was an adventure. I thought I would probably have to major in English. But I took an art class and got hooked. I had wonderful professors who taught me to use art as self expression rather than technique … technique comes along.”

Painting was relegated to a hobby while Stauffer worked in advertising in San Francisco. After 20 years, she was drained.

“I wanted to be done with it,” she said, recalling her feelings in 1990. “I realized I am not an urban person. I need to have beauty around me.”

Landing in Waldport on the Oregon Coast, her output burgeoned during the next 10 years.

“My art was very well received there,” she said.

Stauffer created pastel landscapes, which won contests and earned shows at the Coos Art Museum and the Oregon governor’s office.

“I am attracted to sunrises and sunsets. That’s the times when light is most interesting and evocative,” Stauffer said.

As the ‘90s ended, the big island of Hawaii beckoned.

“I found this inner need to go there and ‘find myself.’ I was in my early 50s,” Stauffer said.

A cedar cabin overlooking the Pacific Ocean on the more affordable east side, with a thermally heated swimming lagoon 15 minutes away, provided paradise.

“It was years of paintings — all intuitive, none were planned. This was a magical time for me,” she said.

“The Swimmer,” displayed with prominence in her home, shows a vibrant woman next to a mysterious face that Stauffer calls “my warrior self.” A blackbird, whose symbolism runs the gamut, looks backward.

“It was life — a new life,” she said. “I realize that it was unraveling my own story.”

She self-published a book shared only among trusted friends called, “Paintings from the Journey to Self.”

One illustration of her painting “Curtain Call” portrays a woman removing two theatrical masks to reveal her true face.

“It’s the masks we all wear,” she explained. “We are all after being the truest of who we are, and the art being the pathway.”

Stauffer became entranced with how Hawaiian culture, Buddhist teachings and widespread reverence for the goddess of fire, Pelehonuamea, blended to create what she labels “deep mythic energies” in the shadow of volcanoes.

But after 16 years, a hurricane, and an infestation of wild pigs and rats were prescient signals to move. One year later, an eruption damaged Stauffer’s former home and engulfed her beloved swimming lagoon.

A friend from Nahcotta, Washington, suggested the Stauffer and Chuck move to the Long Beach Peninsula. T the couple arrived in 2016. Stauffer set about growing flowers around their cottage and resumed her art, seeking to capture the “feeling” of light and the atmosphere of the ocean, bay and skies observed on frequent walks.

She discovered how a palette knife adds dimension.

“You can do all kinds of things to get texture in clouds. It’s not just throwing the paint on. ... It adds texture to the flat canvas,” she said.

Recently, she experimented with paper clay to lift images even further off a flat surface.

“You can keep adding these things to your arsenal,” Stauffer said.

With classical music playing, she begins each work using her weaker left hand.

“It opens up my intuitive side. That’s where the magic happens, but then the right hand gives some control and finishes it,” she said.

She is proud never to have repeated a scene. Asked about the reward, her reply is immediate.

“Inner peace,” adding with a clarifying smile, “while I am painting.”

So is that more valuable than the completed picture?

“I love to paint. It’s my zone where time disappears. I sit down and then it’s two hours later ... I just keep going and piling up the paintings. I am just glad I am not a stone sculptor,” she said.