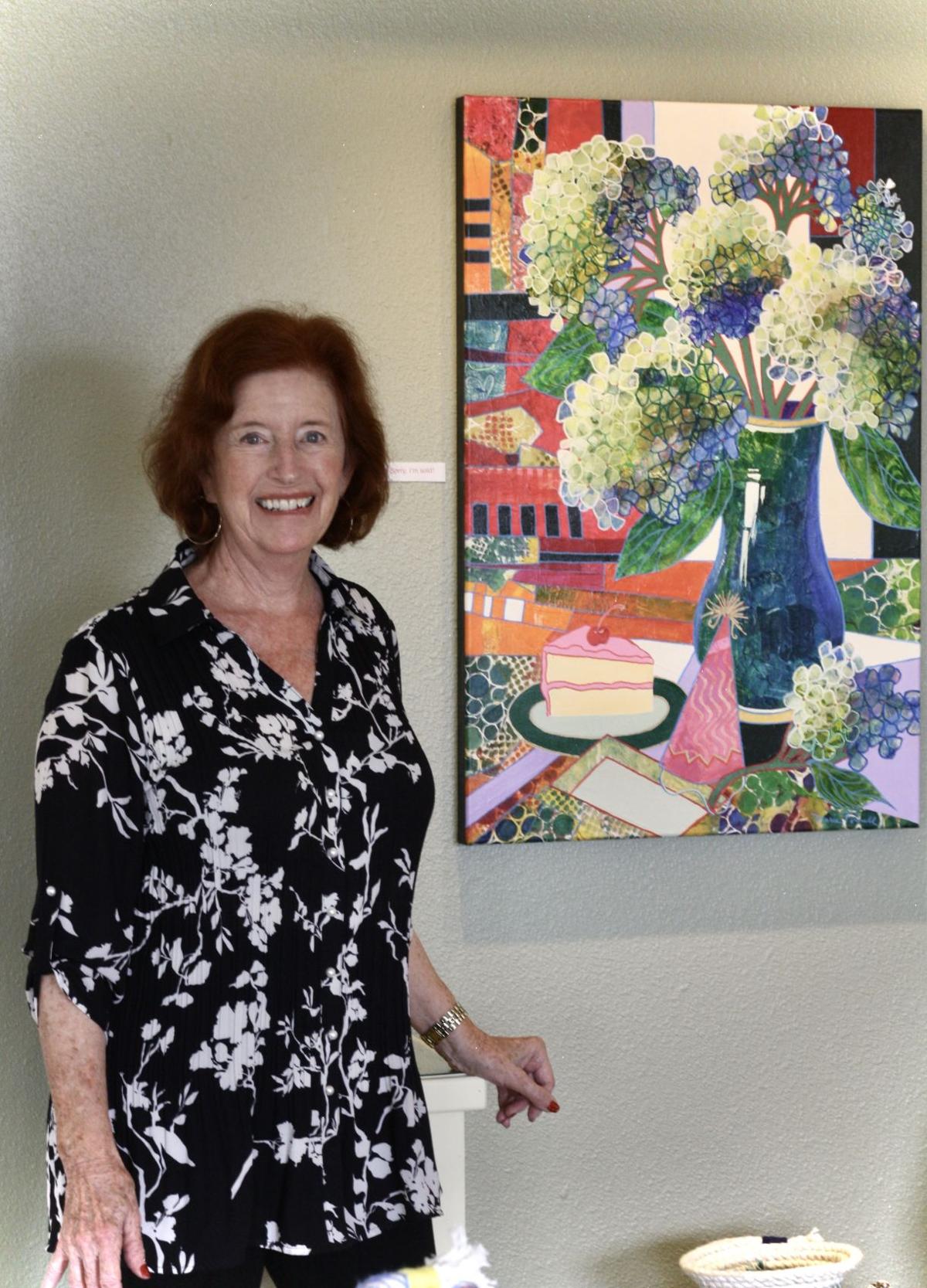 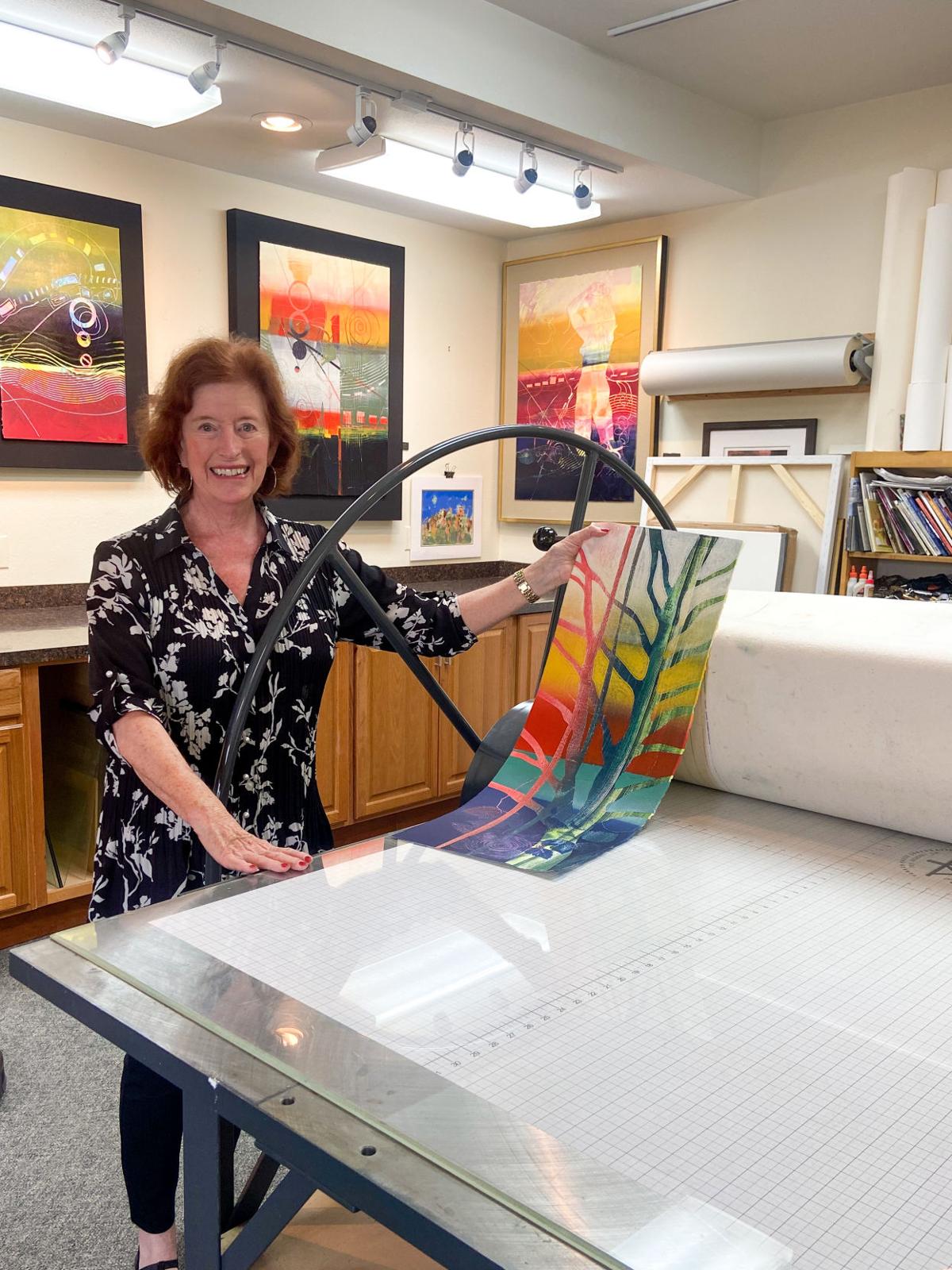 Powell stands at her large printing press in her studio. 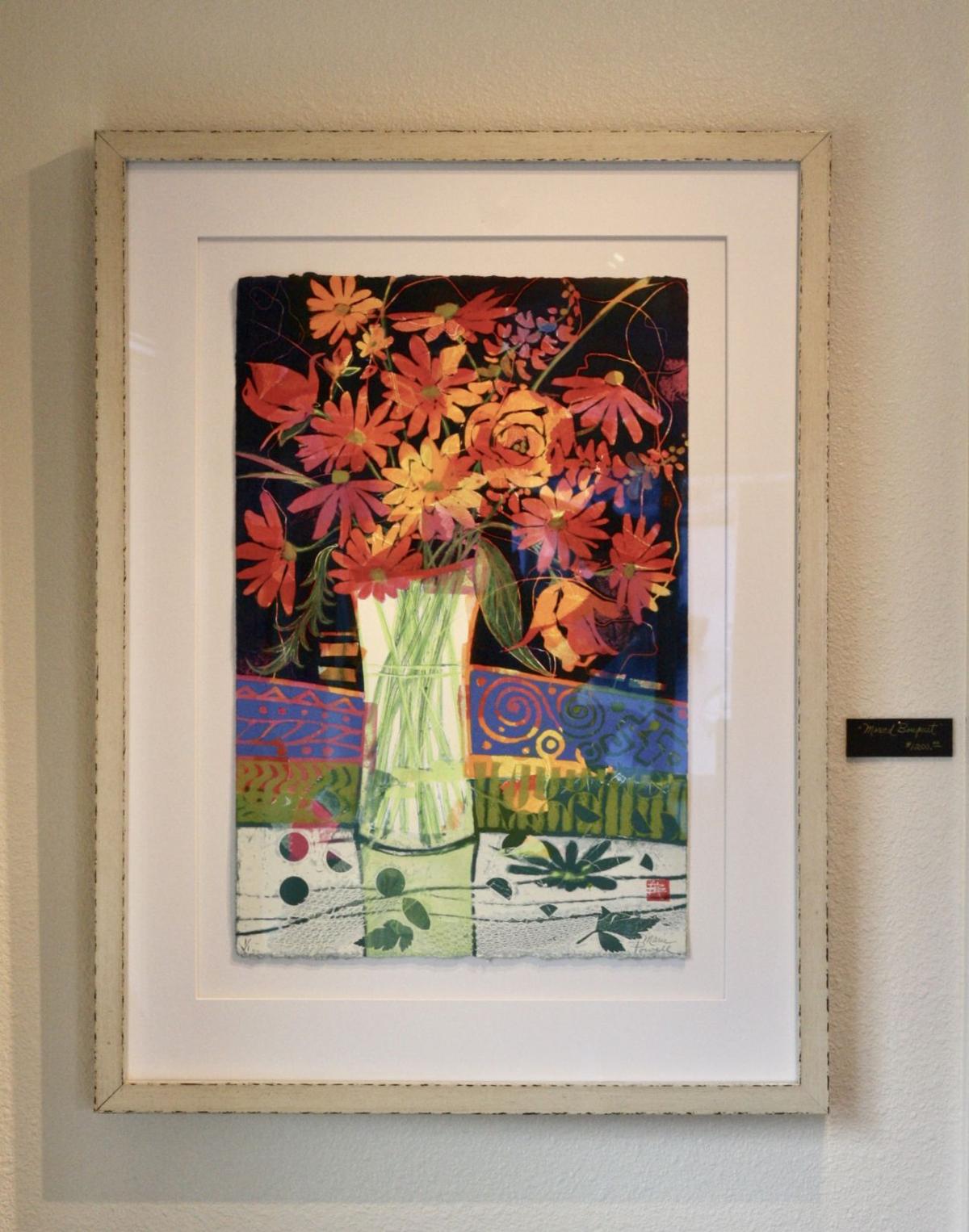 Powell stands at her large printing press in her studio.

Just married, artist Marie Powell and her husband, Randy, grabbed their bicycles, hopped on a plane and set off for a bike trip around New Zealand.

Little did they know that they would return to Whangarei, New Zealand for the following 28 summers, where Powell splits her time making art.

Powell has been a printmaker and mixed media artist for over 40 years, with work frequently shown on the North Coast and New Zealand. She runs a studio in Ilwaco, Washington, and is known for her abstract and vibrant monoprints.

The Port of Ilwaco’s lively fishing scene and woody wilderness are reflected in some of Powell’s series’ that feature Chinook salmon, forests, the ocean and the Columbia River.

Many of her pieces depict flowers in a vase or other floral designs.

In the sub-tropical environment of New Zealand, Powell finds the environment similar to the Pacific Northwest but with brighter and warmer colors. When she works there, she notices her work becomes more colorful and vibrant.

“The environment and climate, it really influences your art more than you think it does,” she said.

Powell taught home economics and math at Ilwaco High School for 19 years. While teaching, she also was a student, regularly taking art classes and studying printmaking on the side.

She said the most important aspect of her art career was when she studied art at Clatsop Community College. While there, she spent years learning from well-known artists and printmakers such as Kristin Shauck and Royal Nebeker, an internationally recognized painter.

He became her biggest inspiration.

“He was a combination of a good teacher and an extremely accomplished artist. You can’t find that combination very often,” she said.

Nebeker was also a tough critic.

Being a teacher herself, Powell has learned that a strong work ethic and devotion to continuous education in printmaking is what makes her successful.

Powell, a member of the North Coast Printmakers Collective, creates original prints and monotypes with oil-based Charbonelle ink. She prints on Arches 88 printmaking paper, a heavyweight material that can hold multiple layers of ink.

The paper and the framing Powell uses are both made of archival materials, protecting her art from deterioration.

Powell designs each layer of her work on a piece of plexiglass, working from light to dark colors. She places her paper face-down onto the plexiglass and lays heavy, felt blankets on top of the piece before she rolls it through her printing press.

Powell has a uniquely large press. Adding it to her studio involved removing part of the outside wall of her studio to get it inside.

The process of moving her paper through the press is slow and gentle; the wheel makes eight full rotations for the roller to rotate once.

Powell doesn’t always know what she’s going to get once the piece comes out the other side. When she creates a design on the glass, it’s not the same after being pressed. Most importantly, it’s impossible to replicate.

She makes monotypes because she likes being able to tell customers they have the only one.

Powell’s mixed media pieces are a combination of her printmaking and acrylic painting on canvas.

She creates prints on thin rice paper and collages them onto a canvas. Then, she paints images or backgrounds with acrylic paint.

Her prints have become a combination of realistic images and abstraction, which she considers phase three in the evolution of her artistic style. She began creating realistic work, in soft pastel, and later dove into pure abstraction. Her work now meets both styles in the middle.

Powell plans to continue splitting her time between Washington state and New Zealand. She said she hopes to continue printmaking forever, with her husband by her side.

“Marie really likes me, but she loves her art,” Randy said.