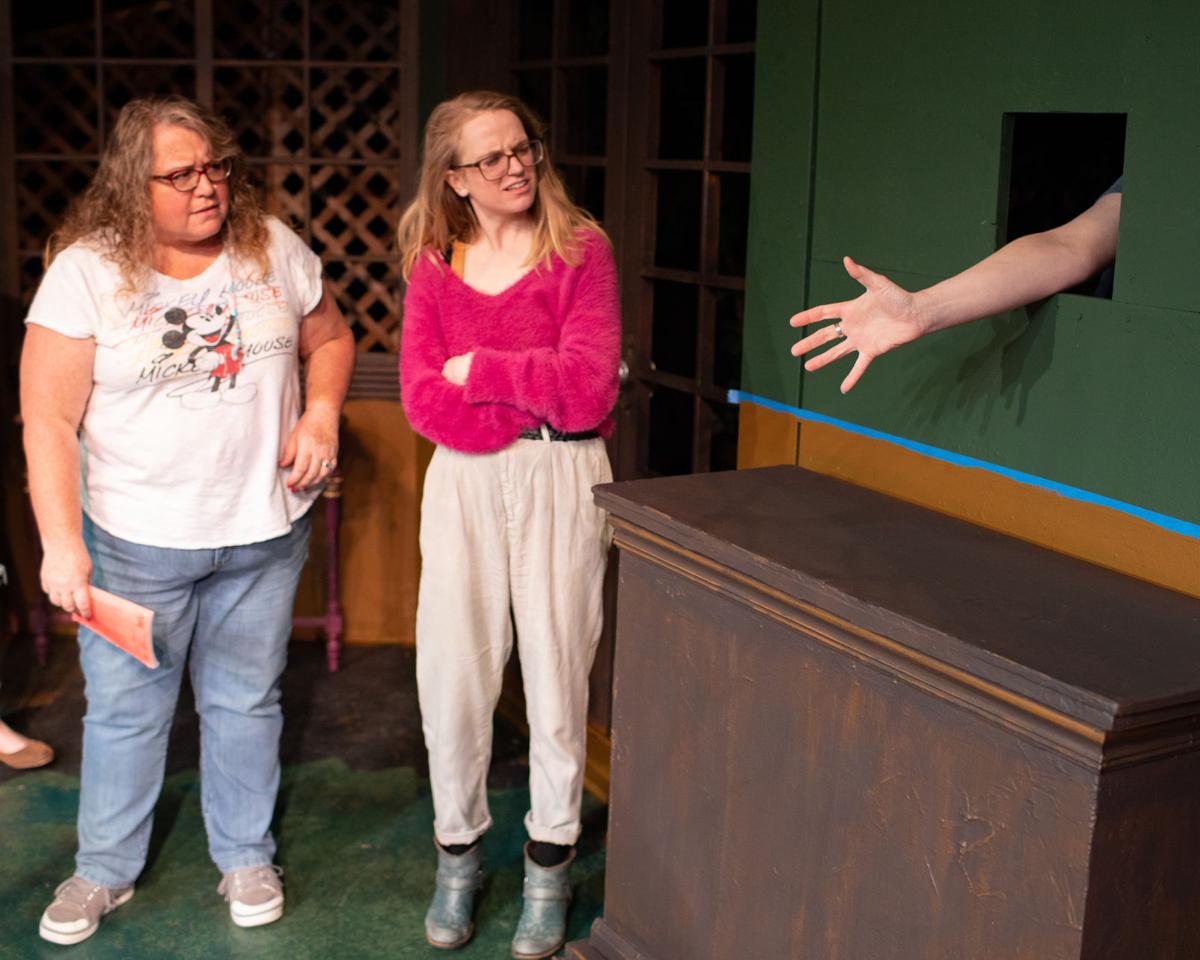 From left, Barbi England as Gerry Dunbar and Ann Branson as Marta “Smitty” Smith, who plays Doris the Maid. 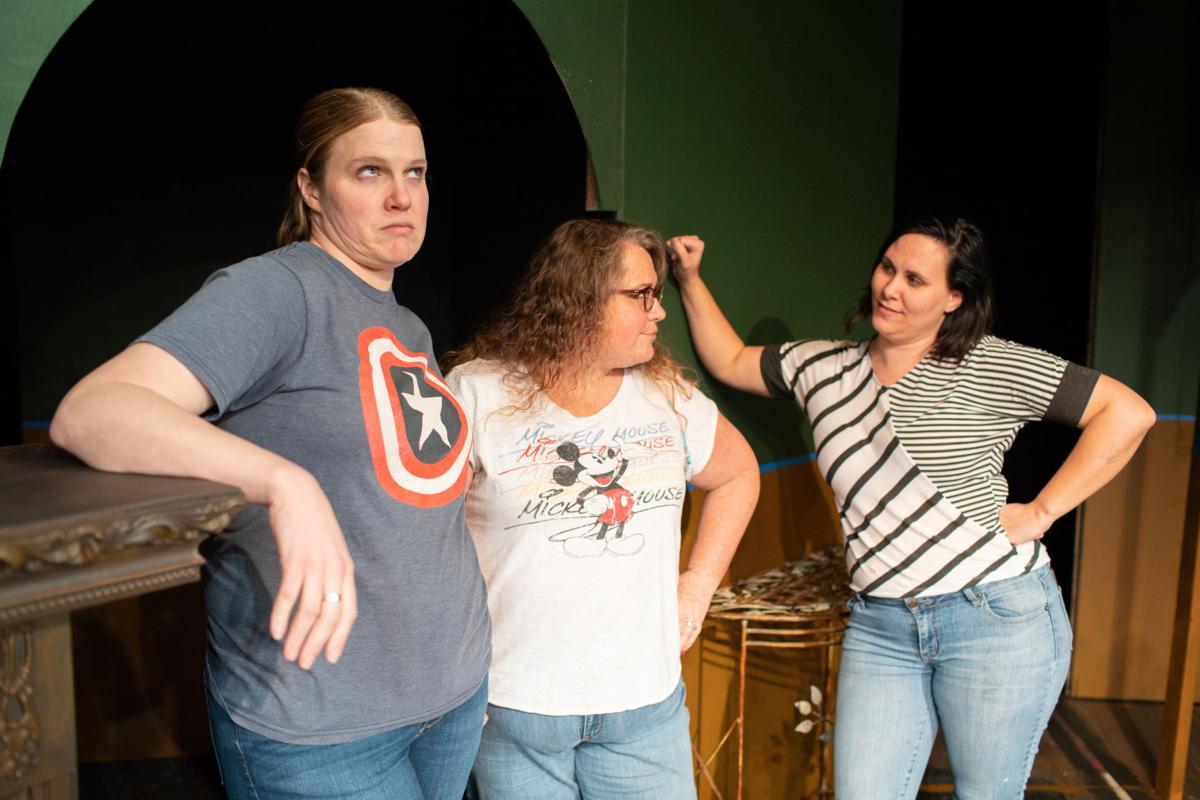 From left, Brittania Williams as Aggie Manville, Barbi England as Gerry Dunbar and Katherine Lacaze as Louise Peary in the show, ‘Play On!’

From left, Barbi England as Gerry Dunbar and Ann Branson as Marta “Smitty” Smith, who plays Doris the Maid.

From left, Brittania Williams as Aggie Manville, Barbi England as Gerry Dunbar and Katherine Lacaze as Louise Peary in the show, ‘Play On!’

Editor's note: this show's opening date has been postponed to April 3.

When you’re attending a rehearsal of a play about a play within a play, sometimes you’re not sure which play you’re watching.

Are the actors in Coaster Theatre’s production of “Play On!” stumbling over lines, or are the characters they portray just unprepared?

Maybe it’s a bit of both. I was watching the actors’ first full run-through of “Play On!” and, at that rehearsal, life imitated art on the Coaster Stage.

But unlike their never-quite-competent characters, the actors in “Play On!” will be fully prepared on opening night March 13 to provide a peek behind the curtain of a community theater.

“This play definitely reflects community theater, and there are many aspects that are apropos for the Coaster Theatre,” said Patrick Lathrop, the Coaster’s executive director and the play’s director. “Some of the characters are other people we find here at the theater.”

The high school student in “Play On!” studying for a biology exam while at rehearsal, for instance, reminded Lathrop of other plays he has directed when students often told him they had to leave early to study for exams.

“It really does reflect the world of community theater,” Lathrop said.

The characters in “Play On!” are three days away from opening night of their play, “Murder Most Foul,” a melodrama written – and rewritten constantly – by a first-time playwright in the community. No one knows their lines, the stage manager is frustrated, the sound technician is grumpy and the director is anxious that the performance won’t be ready when the curtain opens.

She has good reason to worry.

While the Coaster actors – all volunteers – are experienced and skillful, their characters in “Play On!” are horrible. How easy is it to act in such a farce?

It’s fun, the actors say. It’s an opportunity to perform all the theater cliches.

“‘Murder Most Foul’ is a really bad soap opera,” said Richard Bowman, who is Billy the actor and the dashing “Steven Sellers” in the melodrama.

All the actors play some form of dumb, Lathrop noted.

“Their actor character has a lot of quirks, and then they pop up to the next level in the melodrama, which is just delightful,” Lathrop said.

While the characters may have issues with each other, they all agree that the playwright is the source of their dysfunction, and that’s why the show goes on.

“When everyone dislikes the same person the way they dislike Phyllis, they form a bond,” said Barbie England, who plays the melodrama’s exasperated director, Gerry Dunbar.

The audience is brought into the play by the way Lathrop stages it. Gerry directs her troupe from the front row of seats in the theater. Just the way she jumps from her chair to the stage or shouts to the backstage crew evokes the feeling that an authentic rehearsal is underway.

“I decided to put her right dead center. It’s just so funny, especially when the audience isn’t expecting it,” Lathrop said.

When the melodrama does open, anything that could go wrong does go wrong. Props go awry, lines are forgotten, two actors are inebriated and Phyllis is out of control.

Although many actors and crew members may be able to relate to these experiences in real productions, the goofs don’t happen all at once, as they do in “Play On!”

A lot of hard work goes into community theater productions, but audiences only see a “polished, finished product,” England said.

Still, Lathrop promises, there will be a lot to chuckle over.

“Theatergoers and people who are part of community theater will totally get an extra layer of enjoyment out of it,” Lathrop said. “Anyone who’s been involved in a community theater production will enjoy that ‘special reality.’”

$20-$25. Tickets available at the playhouse or at coastertheatre.com