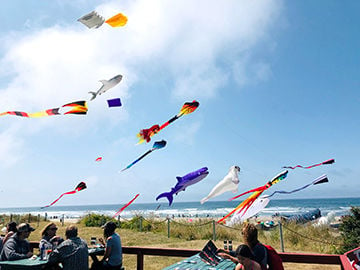 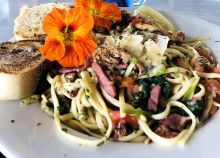 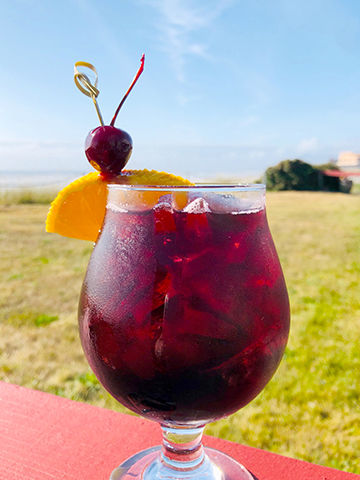 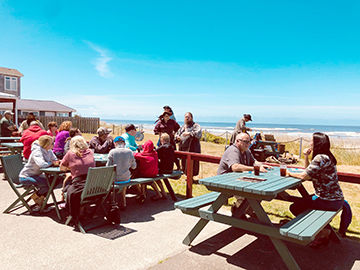 With 150 feet of oceanfront, the Sand Dollar Restaurant & Lounge in Rockaway Beach is the place to go for up-close views of the waves while dining on seafood, traditional American dishes and Romanian cuisine.

“During the winter, the ocean is so close that the waves splash onto our patio,” restaurant owner Emma Poulsen said.

In the summer, the patio becomes a venue for large, elegant events, including weddings.

“This summer, we had three beautiful weddings at our facility,” Poulsen said. “We set up a large arch with flowers, and it’s overlooking the Twin Rocks. It’s really great.”

From birthday parties to rehearsal dinners and more, the Sand Dollar offers in-house catering with items from the menu as well as custom dishes. “We have an excellent venue” Poulsen said, “and an excellent team in the kitchen that can cater for any size event up to our maximum capacity.”

The restaurant is bedecked with sand dollar decorations. Poulsen said she remembers the first time she saw a sand dollar, when she first moved to the Oregon Coast in 2011. “I fell in love with sand dollars,” she said, “and over the years I collected boxes and boxes of them.”

Poulsen and her family used to live in Washington, where she worked for Microsoft and then in the vacation industry for years. When they moved to Oregon, Poulsen worked for Vacasa, which rents out vacation homes.

A man who had rentals with Vacasa also happened to own an empty beachfront building in Rockaway Beach that needed a lot of work. He showed it to Poulsen, who thought it would make a great restaurant space. She signed the lease in November 2013.

“It was a big investment to take this building from a plain, empty building to a functional restaurant,” Poulsen said. It required a complete kitchen furnishing and repairs to just about everything in order to bring it up to code. After about four months of fixing the electrical, plumbing, flooring and more, she was ready to open the business.

When deciding on the name of the restaurant, Poulsen thought back to her large collection of sand dollars. “It was as simple as that,” she said. Poulsen still collects sand dollars along the beach, lets them dry and writes the words “Rockaway Beach” on them with a silver marker. When families come to eat, she hands these treasures out to the kids to take home as keepsakes.

Poulsen said her main reason for opening a restaurant was to bring her own kids closer to her. Her son had been working as a chef in Bellevue, Washington, while her daughter was a waitress in Irvine, California.

“It was a good time to bring them together with their family and put their talents to use,” Poulsen said. “They were away from home for about 10 years, and we all got together and started this restaurant.”

Together, they ran the Sand Dollar Restaurant & Lounge as a family business for a few years. But eventually, her son moved to Virginia to be with his girlfriend, her daughter moved to California to be with her boyfriend and Poulsen and her husband got a divorce.

“In the meantime, I invested all my time and energy in the business,” Poulsen said. “I enjoy cooking now more than any time before.”

Now she’s more directly involved in the cooking, incorporating more traditional cuisine from her Romanian heritage into the menu. With dishes like cabbage rolls, Balkan burgers, schnitzel and chicken paprikash stew, customers can get a taste for the food Poulsen grew up with.

Poulsen, who is Serbian by nationality, called the Sand Dollar “a traditional American restaurant with a fine European twist.” The menu also includes American food and seafood.

She said she gives her ideas to Chef Butcher, who brings them to life in the kitchen.

“He’s a man with a lot of experience in the restaurant industry,” she said, “and I’m happy he came on board when my kids left so I can continue without any hiccups.”

Butcher, who describes himself as a self-taught chef, got his start in the restaurant industry at the age of 13 and worked his way up over the past 40 years. “My mom was a great chef with published cookbooks” Butcher said, “and most of my training is in French classical cuisine through her, though my specialty is barbecue and smoked.”

At the restaurant, Butcher enjoys putting his expertise to use in sautéeing the dishes. He said a couple of his favorite Sand Dollar dishes are the buttery garlic clams as well as the surf and turf platter for two, which comes with clams, scallops, crab claws, cod, oysters, shrimp, steak and grilled Romanian sausages called mititei. “Those are awesome to make and beautiful plates of food,” Butcher said.

The menu offers a variety of seafood, American food and small plates for those with lighter appetites, as well as the Romanian food, which Butcher describes as good, hearty and homestyle. He added that the new menu with Romanian items has been getting a great response.

Poulsen added that they try to source all of their food locally. She currently lives on a farm in Cloverdale, where she has been growing microgreens and herbs to use at the restaurant. Her farm also has chickens that provide eggs for the Sand Dollar. “In certain cases, it’s pretty much farm-to-table the same day,” Poulsen said.

The items at the bar are mostly from Oregon as well. The wine varieties are from different parts of the state and the beers on tap are all produced on the coast.

The Sand Dollar’s large outdoor patio can seat 80 people in the summertime. Inside, 100 more people can enjoy the food and drinks between the bar and a separate portion of the restaurant. Poulsen said the business gets to full capacity from open to close during the summer months, while the quieter winter months give her more time to play with the menu and offer specials.

The Sand Dollar has become a part of the food-enthusiast community on the coast, according to Mike Arsenault, creator of a group called Rockaway Beach Oregon Coast Foodies. The group began in 2017 to focus on the great food, restaurants, growers and providers around the Oregon Coast. Arsenault said it’s a way to encourage people to shop and eat locally.

“I’m a foodie,” he said, “and I travel the world to see food and how it’s made, but I also think food is a way of connecting and building community.”

Though it started as a Facebook group, Rockaway Beach Oregon Coast Foodies has turned into an organization that puts on events at different restaurants around Tillamook County.

“The Oregon Coast is an amazing place to live,” Arsenault said, “and it’s made of many little communities, so I like to connect those communities.”

One of the first events was a seasonal get-together at the Sand Dollar Restaurant & Lounge. Poulsen hosted a Romanian Christmas-themed event at the restaurant, celebrating the flavors of Romania and talking about the history and heritage of the restaurant.

Separately, community members celebrate several holidays, events and festivals on the beach right in front of the Sand Dollar. Poulsen said customers can hang out on the patio to see Rockaway Beach’s Pirates Festival, the Kite Festival and the Fourth of July fireworks.

Poulsen said she hopes to bring more events to the Sand Dollar in the future.

“We have good food, a good reputation here in Rockaway and a great staff with experience and years of working here,” Poulsen said. “We can pretty much take on any challenge that comes our way.”

About the Author Emily Lindblom

Emily Lindblom is passionate about telling the stories of people and places in the Pacific Northwest and loves investigating environmental issues and highlighting the wonders of the region's forests and coastline. She has a background in community reporting and a master's degree in multimedia journalism and enjoys hiking and surfing in her free time.